Please ensure Javascript is enabled for purposes of website accessibility
Latest
This One Chart Shows Just How Boned the Accounting Profession Is SEC Enforcement Released Its Greatest Hits for FY 2022 BDO UK Spreads the Load Are You Ready For the BUSY SEASON FUN Calendar?? EY Reports a Rise in Naughty Behavior Now That People Have Returned to the Office

Let's say you work at McGladrey. You arrive at your office on this particular Monday thinking about all the fun you had this past weekend. You're chatting up co-worker as you debate Coffee-Mate flavors and then mosey back to your Herman Miller to settle in for your morning dose of news and email. As you begin to type a "g" and "o" into your URL bar, "Google" comes up first naturally, but then when the "i" is typed, the rest of goingconcern.com automatically populates and you hit enter. It takes a little while to load on your jalopy of a laptop, but you're used to it. You turn slightly away to sip your coffee only to have your gaze return to your screen to show you this: 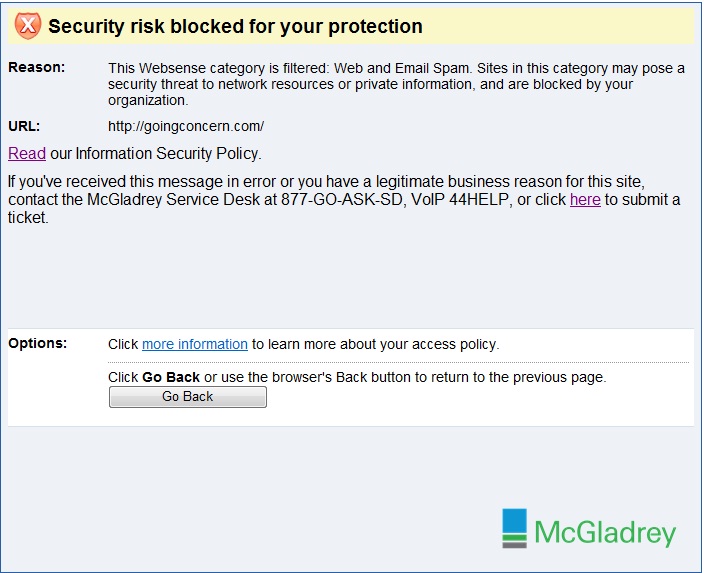 Somehow, you manage to spit your morning joe just off-center of your screen, avoiding another technological disaster. "What's this?" you think to yourself, "can this be right?"

[A couple of minutes pass as this jalopy laptop whirs along]

We've been informed that this has happened in a number of McGladrey locations across the country and right now we're trying to determine the cause of this particular problem. Is it a rogue Mickey G's IT employee that has grown tired of the same Natalie Gulbis pictures, perhaps? Or has there been some kind of conscious effort inside McGladrey to prevent its employees from staying informed with the finest accounting news the worldwide web can offer?

If it is one of the former situations, this is forgivable. Mistakes happen. Employees sometimes take matters into their own hands. It's nothing that swift and definitive action can't fix.

However, if it's the latter, this raises all sorts of questions. One of the most important was raised by one of our deprived tipsters:

You must have really pissed them off. I'm curious about what you did that annoyed them so much.

An appropriate question, I suppose, if a firm is "pissed off" and "annoyed" by TRUTH and intrepid writing (with the occasional typo and colorful language) about the accounting world.

One would have to conclude that if McGladrey brass made the conscious decision to block this fine website, what was the last straw? Was there one event, one story, one recycled Natalie Gulbis image that prompted this unnecessary and unpatriotic action?

Let us consider recent events to see if we can get to the bottom of this.

Earlier this month, the firm announced that its rebranding under the McGladrey name was complete now that RSM McGladrey (aka McGladrey) and McGladrey & Pullen (aka McGladrey) were once again one firm named McGladrey (aka McGladrey). This rebranding was a process that was first announced in June of 2010 that involved a repulsive giant putting green cake and a mystery drink in the Phoenix office. These events were documented by video and memo respectively. We reported on these events because it was important enough to the firm (or people within the firm) to share them with us. Plus, the possibility of a stray golf ball injuring someone or a mass suicide due to spiked beverages was of legitimate concern. It does not seem logical that the firm go to the trouble of blocking this fine site for covering the story of a firm that has spent two years trying to find itself. Sure, another, larger firm was able to roll out a new look and name in less than a month, but that's neither here nor there. Our coverage reflects this branding struggle and, ultimately the triumph of a firm that finally has settled on a single name.

Next possibility – back in late April, we learned that the firm was discontinuing its current partial CPA credential policy. A source had speculated to us it was due to the need of senior associates throughout the business, however the firm told us that it was a decision made after receiving feedback from employees. Once again, we simply reported on facts that were presented to us and it goes to illustrate the trend of firms promoting associates without a credential that we've mentioned in the past. This can't be the reason.

The firm's PCAOB inspection report also can't be the trigger point for the alleged malicious uncalled-for censorship at McGladrey. The report is public record. Compliance Week actually covered it before we did and let's be honest, the results were not stellar. This was not unusal for the 2010 reports, as most of the accounting firm had lackluster results. It just so happens McG's was the lacklusterest.

Coventional wisdom tells us that if there is mis-directed ire towards Going Concern, then these most recent stories might have had something to do with it. Of course this defies all LOGIC and COMMON SENSE. Okay, perhaps McGladrey isn't one of the Big 4 and it doesn't quite have the same allure as Grant Thornton and yes, sometimes the comments can get nasty, and yes, some people leer at the Natalie photos, but we simply are passing along news and analysis of actions taken by the firm itself, its regulator, golfers that it sponsors, and the occasional accident that befalls a random office location. And I think any firm would want their employees to be as informed about their profession as they possibly can. We hope that this how those charged with making these decisions at McGladrey also feel.

One of our sources floated another theory to us, speculating:

If I had to venture a guess, I'm guessing people were spending too much time there and not enough on work.  They did the same thing to QVC, ShopNBC and other heavily used online shopping Web sites years ago because people were doing more shopping than work.
They have also blocked most streaming audio and video for the same reasons.  People eat up boatloads of bandwidth to catch up on TV and are not working.  Plus they put the central servers out of commission because there is not enough bandwidth to do all of the streaming A/V and email, SharePoint, etc.

Hmmmm. Wasted billable hours. If this is in fact the reason for the "security risk" then I'd ask one question – is it fair to punish the hardworking McGladrey employees who manage to accomplish all their professional responsibilities and need Going Concern for the occasional comic relief and/or witty banter of the community? Will those in charge let a few bad apples ruin it for the whole bunch? This hardly seems fair or just. But again, this is just speculation.

The officially word from a McGladrey spokesperson so far is this:

It looks as if access to the Going Concern website was blocked on some McGladrey devices by one of our external service providers. We are working with them to understand and resolve the issue. As far as we can tell, some devices (such as laptops) are blocked, while others (iPads, iPhones, etc.), aren’t.

This is a relief. If it turns out that this is an honest mistake and only a few people are affected, measures should be taken to make those unfortunate employees become whole again. We'll keep you updated as this issue develops but while we wait, I thought it best that we try talking this out.

UPDATE ~3:10 pm:
A McGladrey spokesperson has informed us that "it looks as if our access issues for your site have been resolved." As you were.

EY Oceania has released its second Value Realised Scorecard — a wide-ranging report on how the firm is doing — and Daily Mail Australia immediately latched on to page 33: Workplace Incidents: DM’s salacious headline “EY rocked by soaring number of sexual misconduct and bullying complaints as big four accounting firm workers return to the […]

The Carillion failure is still working its way through the courts and now KPMG is accused by Carillion’s liquidators of missing multiple red flags, the likes of which should not have been missed had KPMG had any clue what it is doing. So say the liquidators. WSJ: KPMG received £29 million from Carillion without qualifying […]

This One Chart Shows Just How Boned the Accounting Profession Is