In a nationwide email to staff today, EY announced that they’re tweaking their vacation policy. Although it’s framed as a switch to “flexible” time-off, the biggest change is that — excluding states in which this practice is illegal — the firm will not be paying out accrued PTO to individuals who leave or are fired counseled out due to performance and definitely not the ‘rona.

EY just made big changes to the PTO policy starting 2021. Any accrued PTO as of 12/31 is forfeited and not paid out. Feels like a sneaky pay cut.

Indeed. According to this email that apparently made the rounds on Fishbowl over the weekend, the firm estimates the move will save $36 million per year “associated with paying unused vacation at termination.” The email goes on to say that “[s]ome of the key points above may not be shared with our people (e.g. $36M savings), but as business leaders I want you to know that this is a significant reason for the change.” Well so much for keeping that secret. 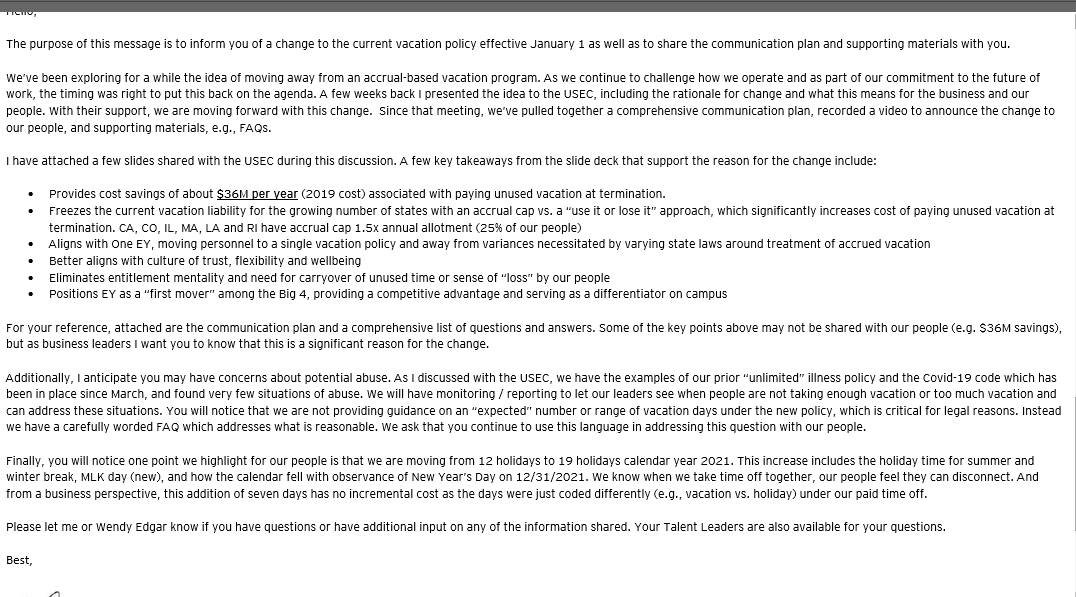 Despite what the leaked email clearly states, one staff-facing reason given for the change is that it’s hard to track time taken according to a tipster.  “That’s actually the fault of their own shit tracking system that takes FOREVER to update if you’re lucky enough for it to update at all.”

You’ll also note that EY believes this updated policy will somehow give them an advantage on campus, likely because “unlimited vacation” sounds way better to potential new hires and interns than “if you get canned, you’re not getting accrued PTO lol.” It will be interesting to see if other firms follow their lead.

This news comes after the “lay-offs but not lay-offs” debacle in late September.