Along with a series of other 2018 CPA Exam changes that will make the testing experience easier for CPA candidates, the latest version of the exam will feature a redesigned CPA Exam user experience (UX) for virtually all interfaces. The AICPA is demolishing the outdated look it’s had for so long and introducing a more modern and open layout, with updated features and colors. Pop-ups, action screens, and questions will all get the new look. It’s a renovation that Chip and Joanna Gaines would be proud of!

To be honest, when I first saw the new interface, I wasn’t sure how it was going to work. I’m so used to the old design – it seemed odd to have to adjust after all this time. And I’ll admit to a certain fondness for the simplicity of the old screens. To me, the new design was eye-catching, but I wasn’t sold on how necessary it was. The more I learned about and experimented with the new look, though, the more I came around to it. It’s better looking for sure, but it actually also does a lot more to make the CPA Exam easier on candidates, and every little bit counts.

Hmmmmm….Is that a load-bearing wall?

At the most basic level, one main update is that the new UX changes the proportions of the exam screens. Prometric testing centers are upgrading to wider, 23” HD monitors, so the CPA Exam is knocking down some walls and adjusting its screen size to fit. The wider screens will allow the replacement of vertical/horizontal split screens in Task-Based Simulations with a workspace where the exam tools and exhibits will open. Having gone back and forth between interfaces in our Gleim CPA Review course for a couple of months now, I can’t overemphasize how much easier it is to research in the exhibits and answer Task-Based Simulations (TBSs) with this workspace instead of splitting the screen. It’s like having two monitors at work – it might take a little getting used to at first, but in the end it’s so much better because you can open multiple exhibits at once and keep both the TBS and exhibits at full size as you work in them. 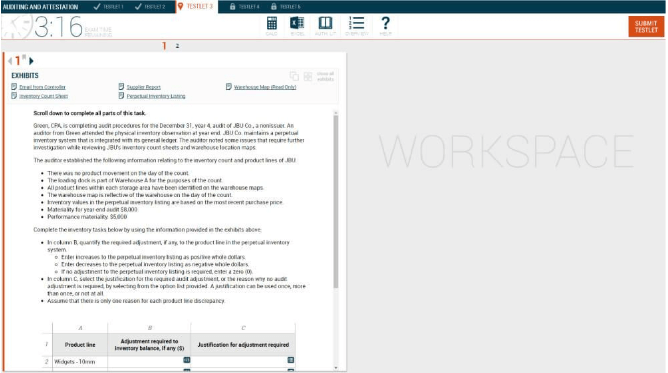 Orange is the new black

Did you know that there is an official color of the year? Yup, apparently 2018 is the year of all things Ultra Violet unless you’re a CPA candidate, in which case the hot new hue for you is Blazing Burnt Orange, which will make the exam’s icons, fonts, and buttons stand out more. And as any Gator fan will tell you (shout-out to Gleim’s HQ in Gainesville and Dr. Gleim’s long-standing relationship with UF), the perfect complement to orange is blue, so exam tools, exhibits, timer, and a few other test accessories will be Deep Navy. Since no good palette leaves out the neutrals, Stone Gray and Linen White will round out the color scheme of the CPA Exam UX. Didn’t I tell you it was going to be pretty?

Out with the old, in with the new

There are also a lot of little improvements throughout the exam process that add value in one way or another. I’ve gathered what I think are the most impactful to candidates and shared some screenshots below. Some of these may seem like small details, but as I said, every little bit counts when the clock is ticking. Overall, there are better options for navigation and more obvious calls to action, which will make progress more intuitive and human error less likely.

The take-away value added with this pop-up is that the alert icon stands out better in yellow (formerly red), and the Submit Testlet button is enhanced in orange (formerly the same blue as Return to Testlet) so it’s indicated as the better choice.

The main difference here is that the header focuses in on the optional nature of the break, the text gets to the point about the timer pausing better, and the action buttons are called out in the bright orange instead of subtle blue.

Now for the best part: This renovated information bar has a lot going on. Notably, the highly important exam timer is now on the left so it’s the first thing your eye is drawn to. In addition, the exam tools stand front and center with more separation from the Submit Testlet button than they previously had. Finally, a brand new feature is a line of tabs at the top left illustrating which testlets are currently open (ie, the one you’re in), checked (ie, the one(s) you’ve completed), and locked (ie, the one(s) you haven’t started yet). Hovering over these indicators will show you the type and number of questions per testlet.

The exam timer has larger numbers that offer more specificity on the amount of time you have left. When the timer reaches the 2-minute mark, it changes into bright red digits to catch your attention like HEY CODE RED FINISH UP.

The toolbar switches up its look depending on the testlet. When featured in a multiple-choice question testlet, the toolbar includes the Calculator, Excel, Overview, and Help buttons. In a TBS testlet, it contains the Authoritative Literature button as well. The main value add here is the Help tool, which will be all-around more user-friendly as a searchable file in comparison with the static directions and help pages of the old the exam.

The question navigation’s new location is handier than a sledgehammer during demo. The line of question numbers now sits at the top of the screen, right beneath the toolbar, where you’ll always be able to find it without having to scroll down. The number for the question you’re on is taller and more orange, and questions you’ve marked are flanked by a little flag icon.

The Calculator also boasts improved capabilities that you can learn all about in our comprehensive breakdown of the CPA Exam changes *shameless bait and switch redirection to our website.*

It has good bones

For decades, the AICPA has delivered a high-quality CPA Exam that accurately tests what a beginning CPA would need to know. The content-level changes from last year and these new changes for this year simply enhance an already prestigious credential. While all of these visual updates are very refreshing, you should know that however the CPA Exam may change, Gleim will always be there to support you. You can see even more illustrations of the new CPA Exam user interface and discover all the digital advancements in our free 2018 CPA Exam changes guide.[tracking name=”gleim”]

We all have that one friend whose door is always open to us. This person has been with you through all the ups and downs, and uneventful middle parts between. You trust this person because they’ve never let you down, their advice is always solid. What if clients thought of you as that friend? What […]