As any old white guy heading up a diversity and inclusion panel will tell you, women at the upper ranks of the accounting profession are in short supply. You don't need an old white guy to tell you this, however, as it is clearly laid out in the AICPA Trends in Supply and Demand report.

Enrollments for women and men are even-ish at the college level: 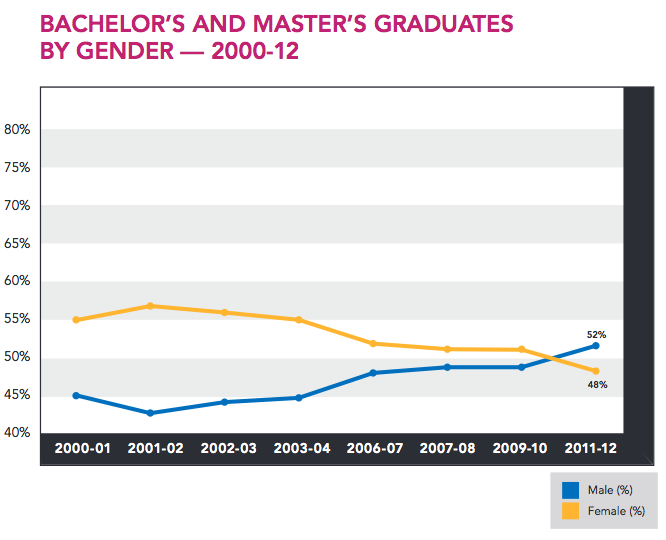 But at the career level, women make up 44% of new hires, however only 19% of partners are women.

Sheryl Sandberg will tell you its our own fault. "We hold ourselves back in ways both big and small, by lacking self-confidence, by not raising our hands, and by pulling back when we should be leaning in," she wrote in her now infamous book intended to empower the meek among us. Certainly that must be it, we just didn't lean in hard enough!

But new research suggests — as many driven, talented, intelligent women already suspected — that this is complete BS.

In the latest issue of the Harvard Business Review, researchers describe what they learned by surveying 25,000 MBA graduates of Harvard Business School over three generations. Not surprisingly, they found that although women and men express the same amount of ambition at the outset of a career, men achieve higher status in companies overall as well as a higher degree of job fulfillment. But here’s the crucial point: The authors found no correlation at all between career success and decisions an individual makes to accommodate family, by limiting travel, choosing more flexible hours, or moving laterally within a company.

“Women were more likely than men to have made such decisions,” the authors write, “but again, none of these factors explained the gender gap in senior management. In fact, both men and women in top management teams were typically more likely than those lower down in the hierarchy to have made career decisions to accommodate family responsibilities.” In other words, very successful people — men and women — demand more flexibility at work and more accommodations for their home lives.

Unfortunately, conventional wisdom remains, telling us it's our children, our spouses, ourselves and everyone but the culture that keeps us from achieving the same level of success as male colleagues. See this research on the Women's Advancement in Accounting, which perpetuates the idea that snot-nosed brats and lazy ass husbands are the ones holding women back:

It is also important to understand to what extent career tracks may be a function of personal choice and gender-related life circumstances. Over half of new hires into public accounting are women. Very broadly, stress related to work-home conflict has a greater impact on women’s public accounting career paths than men’s (Collins, 1993). At the most practical level, turnover intentions of public accounting professionals have been found to be predicted not by gender directly, but rather indirectly through gender rela ted non-work variables such as hours of household help employed and impact of family events on career plans (Hooks, Thomas and Stout, 1997). Lifestyle preference in terms of family versus career orientations has also been found to be significantly associated with turnover of female accountants (Bernardi and Hooks, 2001). The AICPA report found that almost half of male partners had a spouse who did not work outside the home as compared to only 12% of fe male partners. Taken together, these factors beg the question, is it possible for women or men to move up the ranks in public accounting while having children and a full-time working spouse? Can this be done without the kind of extended family supports unavailable to most professionals in today’s increasingly mobile society? The point at which women are most likely to scale back or leave the workforce is likely to coincide with the point at which the w omen are most experienced and finally providing a return on the firms early years of investment in training and development, in particular because the demands of raising children do not lessen as children move through their primary and secondary school years. In fact, as children advance through school the difficulty of providing acceptable alternative care and the deman ds on parents’ time actually increases (Lightbody, 2009).

As we've previously discussed when it comes to Millennials and the partner track, is it possible that women just don't want the same career path? Does there have to be some significant factor at work or could it simply be that very few women are attracted to that lifestyle?

Whatever it is, it's not for lack of leaning in. I know plenty of intelligent, hard-working, kick ass women who lean in plenty and couldn't care less about ever making partner. So there.

The anti-WFH, pro-RTO propaganda has chilled out a bit in recent months as boomer and boomer-adjacent Gen X CEOs wait out the next big recession but even those pinstriped menaces in the C-suite who think all remote work is the domain of the lazy can appreciate this info we are about to share with you. […]