We haven’t reported on the Sony hack yet because it has absolutely nothing to do with public accounting. Until today.

We haven't reported on the Sony hack yet because it has absolutely nothing to do with public accounting. Until today.

Fusion is reporting that among the leaked documents, hackers came across this little nugget:

The Sony Pictures hack that has sent the Hollywood mega-studio into chaos is spreading far beyond the film industry, as hackers appear to have released documents containing detailed salary information for more than 30,000 employees of Deloitte, the New York-based auditing and professional services firm.

Why would Sony have salary information on 30,000 Deloitte employees? We're glad you asked!

It appears a single individual currently employed in HR at Sony used to work at Deloitte, and just so happened to have this file on their work computer.

Included among the Deloitte files is a spreadsheet containing the 2005 salary information for 31,124 U.S. Deloitte employees. The same spreadsheet also contains race and gender data for each worker, although unlike the Sony Pictures files, names are not attached to the salary information. The data provides a rare look inside a high-profile firm’s salary structure.

Here's just a taste, as shared by Fusion: 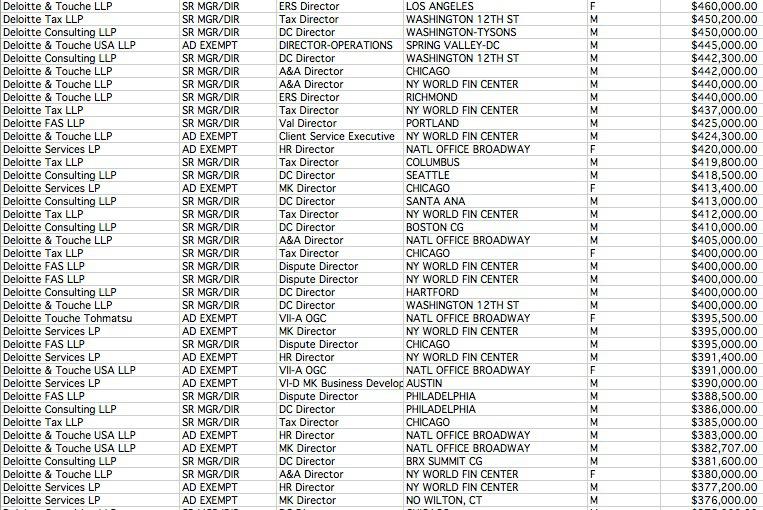 Most revealing is that the data — which Fusion says appears to have been compiled for a 2005 internal study on possible gender discrimination in compensation — shows most of the firm's highest earners are (predictably enough) men:

Also noteworthy, despite that earth-shattering revelation, the research concluded that most groups didn't actually have a compensation discrimination problem. Though 18 of them did. From a PowerPoint included in the files:

“Of the 251 regressions, where we looked at all the possible variables that could predict salary there were 58 groups where salary was predicted by race or gender,” the document reads. “Of these 58 regressions, 34 included race or gender as a predictor in a discriminatory way. Some of these were more significant than others. Of the 34 significant regressions, there were 18 that were problematic based on both regressions & t-tests. These 18 groups were looked at very carefully to make appropriate recommendations.”

Fusion says they are continuing to crunch the data and in the meantime, we'll see if we can't find a copy of this ourselves.

[Updated post from June 6 with new data from Going Concern’s 2013 comp thread.] Big 4 compensation season kicked off a little more than a week ago when Deloitte employees got their comp statements and then proceeded to head over to r/accounting to whip it out and show it off for all to see. Since […]

Deloitte Australia has disclosed stats on workplace misconduct and revealed how many people got punted as a result of internal investigations reports Australian Financial Review: Deloitte has investigated 145 misconduct allegations over the past year and found more than half, or 80, were substantiated, leading to 20 employees being “exited” from the consulting firm. The […]