When the PCAOB released its first batch of COVID-era inspection reports at the beginning of last November, everyone’s favorite audit cops started off with a bang. That group of 2020 inspection reports included six of the top seven largest public accounting firms in the US: Deloitte, PwC, EY, KPMG, BDO USA, and Grant Thornton. Missing? RSM US.

But last week the PCAOB released another batch of 2020 inspection reports, including the results of RSM’s day with PCAOB inspectors. But instead of following the same path as the Big 4 firms and Grant Thornton by cutting down the number of auditing errors found during the most recent inspection cycle, RSM’s inspection report most resembled BDO’s, which is rarely ever a good thing. 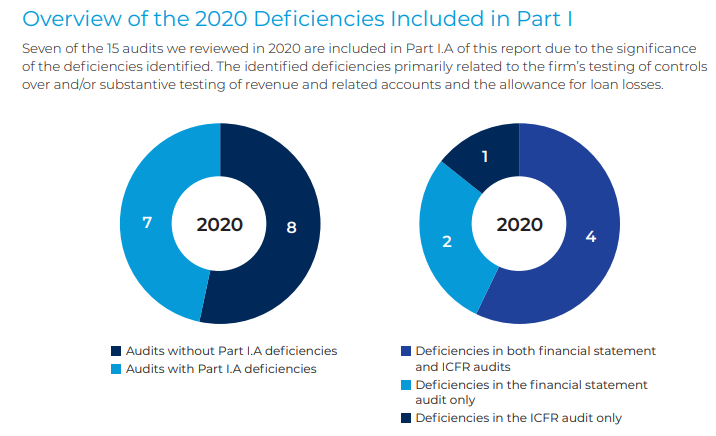 So seven of the 15 audits inspected by the PCAOB weren’t up to snuff, for a deficiency rate of 46.7%. Of the top seven firms, only BDO’s was worse at 54.1%. After having one of the worst PCAOB inspection reports ever in 2017, RSM’s auditing was trending in the right direction, with error rates of only 29% and 20% in 2018 and 2019, respectively. RSM’s response to failing nearly half of the audits inspected by the PCAOB was they take inspections seriously, this will help them improve, we have a long history of audit quality, etc. In other words, they’ll try to do better next time.

A good place to start would be improving audits of internal control over financial reporting, as the majority of errors called out by inspectors had to do with not not performing sufficient testing of the design and/or operating effectiveness of controls selected for testing; not identifying and/or sufficiently testing controls over the accuracy and completeness of data or reports that the issuer used in the operation of controls; and not identifying and testing any controls that addressed the risks related to a significant account or relevant assertion.

Here’s a scorecard of the major deficiencies caught by inspectors in RSM’s audits of internal control and audits of financial statements: 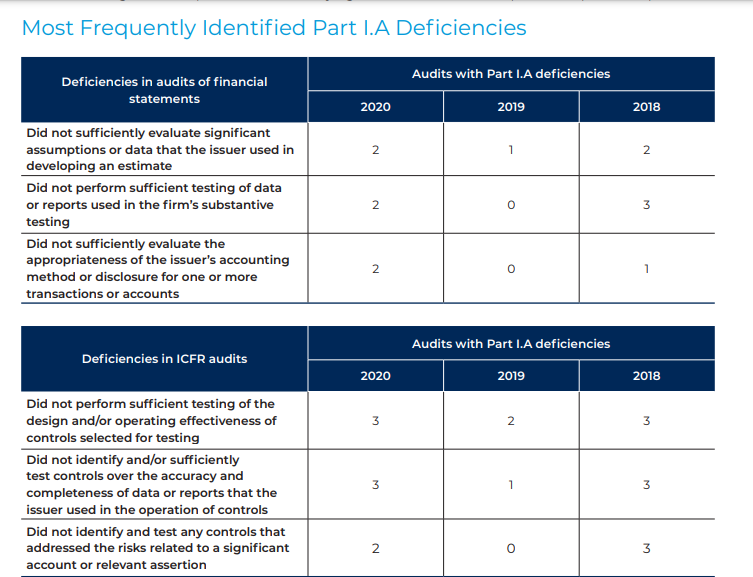 Across the seven deficient audits, inspectors found several instances in which auditing standards weren’t followed correctly, including 12 mistakes regarding internal controls, three in responding to risks of material misstatement, and three in evaluating audit results.

Two of RSM’s seven failed audits were for clients in the financials sector, while two others were for issuers in an unidentified sector, according to the PCAOB. The other three errors occurred on audits for issuers in the communication services, consumer discretionary, and industrials sectors.

More information about RSM’s crappy 2020 auditing report card can be found in the full report below: