If it was any other year, champions of audit quality would be throwing Deloitte a ticker-tape parade for only having two glaring errors out of 53 audits inspected in the firm’s newly released 2020 PCAOB inspection report.

But it was PwC auditors who were the ones pulling ticker-tape out of their hair while Deloitte was standing on the sidelines looking like McKayla Maroney during the 2012 Summer Olympics in London. It does seem a bit fishy that PwC, after making significant mistakes in 18 of its 60 audits of public companies reviewed by the PCAOB in its 2019 inspection report, dropped to only one deficient audit out of 52 inspected in its 2020 report—which is a record-low 1.9% error rate. And if it wasn’t for PwC, Deloitte would be the one with the all-time low deficiency rate of 3.8%.

There has been speculation that because of the pandemic and the recent unrest at the PCAOB, the audit cops are going soft on audit firms during the inspection process, resulting in the historically good 2020 report cards for PwC and Deloitte. But if you look at Deloitte’s deficiency rates in its past five inspection reports, the quality of the firm’s audits has been trending in the right direction:

So it’s not totally inconceivable that Deloitte’s auditing improved as much as it did from 2019 to 2020. The PCAOB found deficiencies in both the financial statement and internal control over financial reporting audits during the most recent inspection cycle, as the graphic below shows: 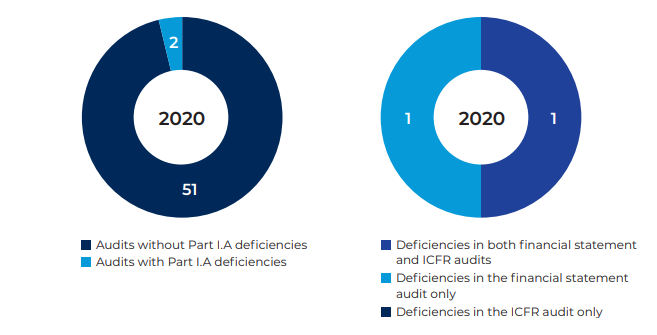 According to the PCAOB, the most frequently identified deficiencies were: 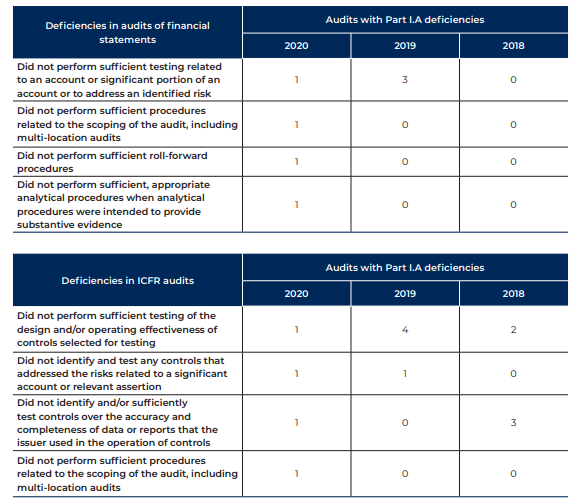 So if PwC and Deloitte got gold stars from the PCAOB, what did KPMG, EY, BDO USA, and Grant Thornton get? We’ll let you know in the coming days. In the meantime, Deloitte’s 2020 inspection report is below in its entirety:

It’s True: PwC Had a Nearly Flawless 2020 PCAOB Inspection Report
Deloitte Is Doing a Much Better Job Lately of Not Screwing Up Audits