When the PCAOB gave a preview of its first batch of COVID-era inspection reports for annually inspected public accounting firms in October, the audit cops said:

For the majority of the annually inspected audit firms, we identified fewer findings in 2020 compared to our 2019 inspections.

Notice how the PCAOB used the word “majority” and not “all.” If you’ve visited this website for the past week, you’d know that of the six 2020 inspection reports released by the PCAOB recently, PwC, Deloitte, EY, KPMG, and Grant Thornton all improved their deficiency rates over their 2019 reports. That means there’s one firm whose auditing remains a frickin’ mess. People who know, know which firm we’re talking about.

From 2012’s inspection report to 2016’s report, BDO USA had a stupendously awful average audit failure rate of nearly 63%, which I’m fairly certain is the worst five-year stretch of auditing futility by a firm that is inspected annually by the PCAOB. BDO followed that up with better-but-not-great deficiency rates of 39% (2017), 48% (2018), and 42% (2019). But according to its 2020 PCAOB inspection report, BDO is back to its bad auditing ways of the early to mid-2010s: 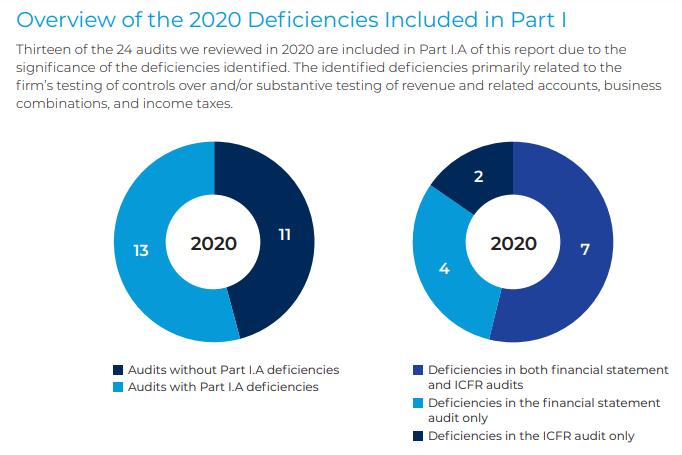 That adds up to a failure rate of 54.1%, which would be an all-time high deficiency rate for many firms, but for BDO, it’s the firm’s fifth-worst deficiency rate since 2012. That’s really bad for a professional services firm with a multimillion-dollar assurance practice. (Note: BDO’s assurance practice’s revenue only increased 3% in FY 2021, while advisory and tax each grew by 17%.)

Here’s a chart showing what exactly confounded BDO auditors the most: 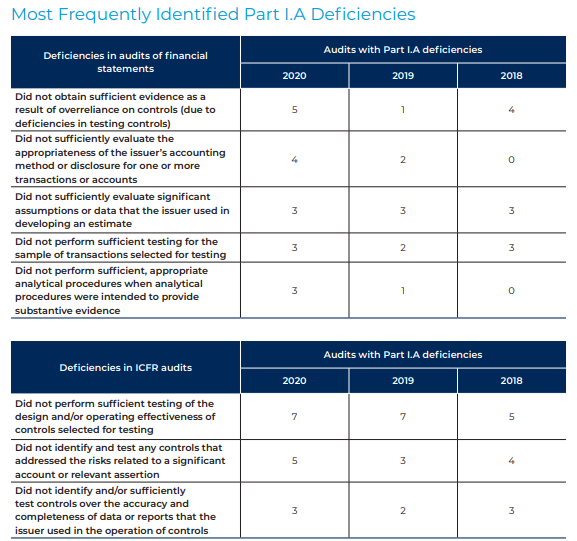 But there’s more: BDO racked up 29 separate instances of violating Auditing Standard 2201, An Audit of Internal Control Over Financial Reporting That Is Integrated with An Audit of Financial Statements, followed by eight different violations of AS 2301, The Auditor’s Responses to the Risks of Material Misstatement, and seven for AS 1105, Audit Evidence.

In its response to the inspection report’s findings, BDO said: “We remain committed in making audit quality our top priority. The PCAOB’s inspection process assists us in improving our audit performance and our underlying quality control systems. We look forward to continuing to work with the PCAOB on the most effective means of achieving this objective.”

But BDO has been saying the same thing for years, and at this point, “making audit quality our top priority” seems like a lot of nonsense. Maybe the Center for Audit Quality should kick BDO USA Chairman Wayne Berson off its board because his firm’s stenchy auditing might give the CAQ a bad name, I dunno.

Here’s the full BDO USA 2020 PCAOB inspection report in all of its BDOness: