Latest
If You Are Young, Male, and Taking the CPA Exam We Have Some Good News For You Things Are Getting Spicy Between PwC UK Employees and Lord Sugar Compensation Watch ’22: Big 4 Firm With the Most Negative Publicity In the U.K. Tries to Change All That By Giving Staff Raises of At Least £2,000 Back In My Day, Accountants Had to Walk Uphill Both Ways In the Hot Sun to Get to Work, Says Crotchety Old British Guy Friday Footnotes: Firms on India Hiring Spree; PCAOB Heads Overseas; PwC Lets You See Your Family This Summer | 5.6.22
Nearly three years ago we surprised everyone with the news that PwC was rebranding itself. It was big news for awhile and not everyone liked the new look, but just like a website, eventually people get tired of bitching about the changes and they move on. Shortly thereafter, we highlighted an obscure report from Marketing Week in the UK that said EY would be the next Big 4 firm to "develop a new brand."
We kinda forgot all about that until a few weeks ago when we started receiving several tips about EY 2020, a new strategy initiative thingee. Most of the tips centered around the firm opting to join the letters-only club. Here's how one tipster described it:

New branding is coming at the beginning of the new financial year (July 1). It's aimed at unifying the brand, bringing together all the different looks (EY, E&Y, Ernst & Young, all the various visual flair and color differences) into one unified look. Heard rumors of a lot more dark colors (more of the black and grey) with accents of yellow as highlight, all around one EY brand.

We haven't seen any art yet, but a tipster tells us, "word is the EY rebrand is barely a change. [The] beam's here to stay."
After watching the reaction to PwC's new look, I'm sure the firm's decision to just go by "EY" will be the most drastic change.
Anyway, as the EY marketing team will probably tell you, the visual stuff is really just one part of it. It took us a while, but we managed to obtain some internal documents, and it's clear that the firm wants its people to think that this is WAY more than just a name change.
Exhibit A: Here's part of a message from the firm's internal web site that discusses the background with interjections by me:

How and why we arrived at Vision 2020
We launched Vision 2020 for two reasons. First, the world, the business environment and our clients' needs are changing at a remarkable speed. If we want to continue to be relevant, we need to change. But it's not just about keeping pace with change, it's about keeping ahead of the curve.

Accounting firms…resisting change? Get out of town.

Second is the plain fact that we've not been growing as fast as our competitors. This is something that we must address. Some of this was due to the a divergence in strategy, and the fact that our competitors have been more aggressive in making acquisitions. Some of it was compounded by our not focusing enough on fast-growing markets. But some of it was because of our internal focus. We were looking on the inside when the action was on the outside.

Too much navel-gazing! That's an interesting confession. That may be worth a future discussion.
But okay, let me just clarify something here for those who haven't been paying attention — EY is referring to PwC and Deloitte here. According to Big4.com's most recent analysis, EY had declining revenues in two consecutive years — 2009 and 2010; the only Big 4 firm to experience this kind of contraction. They've managed to rebound in 2011 and 2012, but that allowed PwC and Deloitte to distance themselves from EY and KPMG. KPMG stumbled last year while EY jumped ahead and now it seems that the House of Weinberger is ready to refocus on catching the other two. KPMG will be the fourth pony in this race for the foreseeable future.
What about those acquisitions? Well, it's true that PwC and Deloitte have been shopping sprees for several years, but we're now seeing EY make some moves, most notably with global acquistions in Canada, the U.S., and Germany so far this year.
Back to the communique:

To be clear, we got a lot right. We made great strides in globalization, we developed a great brand in the entrepreneurial space and our investments in emerging markets are paying off.
It was with this in mind that we thought about what EY's role was going to be going forward and designed a comprehensive and very inclusive strategy review process and the output has been incredibly valuable.
Through it, we consulted with a lot of people and experts — outside economists, our clients, our partners and our people. We established a Strategy Discussion Group consisting of approximately 30 partners. Their mandate was to explore the topics identified by the Global Practice Group (GPG) and Global Advisory Council (GAC) and to develop initial proposals for consideration. We met several times with the Global and Area Executives. And throughout the whole process, we talked to around 3,000 partners across the world through Area partner webcasts, a strategy refresh microsite and various partners meetings.
We have undergone a thorough review process every step of the way. We actively sought out different opinions from partners with different roles and perspectives across the entire organization.

Whatever, you get the idea.
But how about something really interesting? Here's the document with something a little more specific: 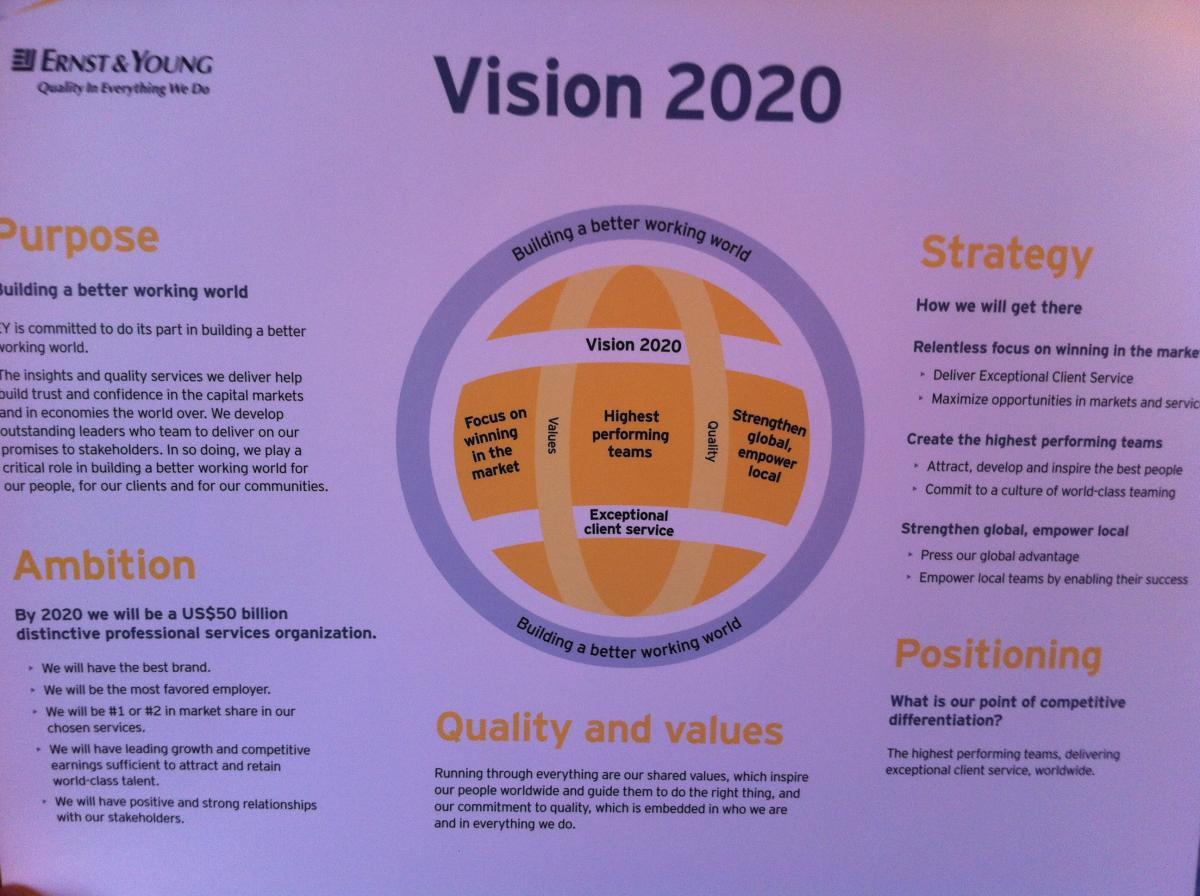 Obviously there's a lot of corporate messaging in there, although stating "We will be #1 or #2 in market share in our chosen services" and the mention of the $50 billion in revenue by 2020 is eye-catching.
Yeah, what about that $50 billion? EY's revenue for its most recent fiscal year was $24.4 billion. That means they plan to more than double that number in seven years. So, if I run some quick arithmetic, that means that EY would have to increase its revenue every year by an amount that is slightly less than Grant Thornton's global revenues.
Seems like an ambitious goal, doesn't it? One of our sources at EY thought so and told us there are a few key things that would have to happen for the firm to come even remotely close to achieving it:
1) A rapidly expanding advisory business
2) More acquisitions and
3) A lot more Partners, Principals, and Executive Directors.
I'll touch on the advisory bit in a sec, but first, as we noted above, EY's effort to get busy on number 2 is picking up. This new strategy is nice for EY because now that people know they're an active and eager suitor, some boutiques may jump because they never got a good feeling from PwC or Deloitte. It's also significant because, as the Big4.com analysis states, "Growth in all of service lines was almost entirely organic, with acquisitions accounting for less than one half of one percentage point."
EY's growth may just get a shot in the arm from a more aggressive acquisitions strategy.
Second, last week we discussed EY's effort to loudly announce their new PPEDs. What better way to attract new talent for your rapidly expanding business than to tell everyone who will listen about all the smart new people you've hired. I don't expect this strategy to change at all. In fact, we may see EY get more aggressive here, also.
Last, the expansion of the advisory business is the firm's biggest risk area, but it carries huge rewards.
More than ever, these firms are going to embrace the opportunity to chase non-audit services that will make the tenet of independence even more of a fantasy than it ever was. Among the Big 4, EY's advisory revenue as a percentage of its total is third largest, which means there is room to pursue non-audit services more aggressively.
So naturally this is going to make independence a bigger issue, again.
As the advisory business expands, the more potential there will be for conflicts with the firm's audit clients. Since EY and the rest of the Big 4 want to be known as trusted business advisors rather than simply auditors or tax preparers, the advisory business gravy train will continue to be a priority and circumventing independence will become an ongoing exercise. We've already seen EY cross the line in this area with the revelation that it was lobbying on behalf of audit clients, so it stands to reason they can make arguments in other cases for the sake of expanding business lines that expand their influence can command larger fees while the audit business gets pushed into the background.
Really, the timing of all this is perfect for EY because all the firms are doing it and they don't give a damn if people think they're less independent. The advisory businesses have momentum and since independence is in the eye of the beholder, it's easy for any firm to say, "That's just, like, your opinion, man."
Still, it's a rare case when an expansive, opaque strategy with few measurable goals goes according to plan. As one source remarked to us, "I don't even think the marketing people understand what we're doing aside from going by 'EY' from now on." I dunno; maybe that's the idea.
An EY spokesperson had not responded to our request for comment at press time.
In the end, the firm is eager to establish itself as an institution that can be ahead of the curve on change, but what seems to be missing in their confident message is the element of unpredictability. Watching the business developments in Asia and Africa is one thing — I'm sure EY can do that fine. It's having a front row seat to the largest bankruptcy in U.S. history and not speaking up that have the tendency to throw things off the rails.

Coming in at No. 52 on the 2022 Fortune BCTWF is the ol’ Black and Yellow. EY has made quite a few head-scratching, unpopular decisions over the last couple of years, but here they are on the BCTWF for the 24th time in the ranking’s 25-year history. While doors will open for someone with experience […]

Remember last week when EY tried to convince all of us that employees prefer empathetic leadership over raises and promotions? LOL, good one EY. Anyway, Brandon Hall, founder and managing partner of Hall CPA in Raleigh, NC, who was a senior consultant with EY earlier in his career, knew the empathy-over-raises social media post from […]

If You Are Young, Male, and Taking the CPA Exam We Have Some Good News For You

Things Are Getting Spicy Between PwC UK Employees and Lord Sugar