There’s been quite a bit of poaching activity across the globe lately among the four horsemen of professional services firms, so here’s a quick recap of people who have left their green dots behind and joined the redheaded stepchild of the Big 4.

In the UK, Serdar Cabuk joined KPMG as a partner in the firm’s Cyber and Technology Risk business. He will mostly be serving clients in the consumer and energy sectors, “where his expertise in technology and risk transformations will help clients better manage their cyber and digital risks,” the firm said.

Prior to joining KPMG, Cabuk was a risk advisory partner at Deloitte who led the Cyber Risk practice in the Nordics. He joined Deloitte in 2018 after spending the previous three years at IBM, where he built and led the company’s European Security Strategy and Risk practice. Cabuk also spent two years at EY, where he was a cybersecurity director from 2013 to 2015, according to his LinkedIn profile. [KPMG/LinkedIn]

Our final stop is Switzerland where KPMG nabbed two Deloitte directors—Taher Balafrej and Miles Underwood—and gave them keys to the partnership. 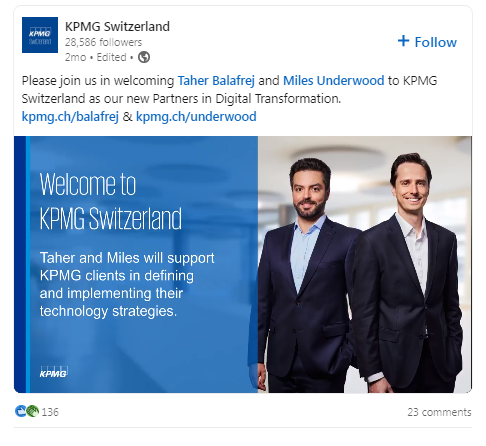 Balafrej specializes in IT strategy, digital transformation, IT outsourcing, and IT cost optimization, according to his LinkedIn profile. After spending four years at IBM, Balafrej joined Deloitte Consulting in 2011 where he was a manager in the firm’s IT Strategy and Governance business. He left Deloitte in 2013 for Novartis but rejoined Big D in 2016 as a senior manager and then as a director in the firm’s Technology Strategy and Transformation business.

Underwood spent 14 years at Deloitte Switzerland before being hired by KPMG, working his way up from senior consultant to director, according to his LinkedIn profile. His still active Deloitte Switzerland website bio (lol) says he leads Deloitte EMEA (Europe, Middle East, Africa) Community of Practice on IT Outsourcing, helping clients “realize the transformational benefits of outsourcing by navigating the entire end-to-end sourcing process, from initial sourcing strategy and analysis, through to deal execution to transition.”

Before Deloitte, Underwood spent time at Bank of America and Sony.

[Updated post from June 6 with new data from Going Concern’s 2013 comp thread.] Big 4 compensation season kicked off a little more than a week ago when Deloitte employees got their comp statements and then proceeded to head over to r/accounting to whip it out and show it off for all to see. Since […]

[Update to post originally published on May 25 with a fourth ex-Alliantgroup employee sharing their experience.] One thing I have learned since IRS Criminal Investigation and the Justice Department conducted a court-ordered raid of Alliantgroup’s Houston offices on May 20 is that there are A LOT of horror stories from ex-Ag employees about their experience working […]