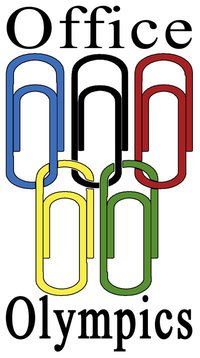 Did you get passed over for that promotion? Not sure what dish to whip up for the Labor Day potluck at the boss's house? Need a new mobile app suggestion for those bathroom breaks?  Email us your dilemmas and queries so that we may put your mind at ease.
Undoubtedly some of you are still held under the spell of Olympic fever. Case in point: the following message was sent to us by a reader who is in the need of event ideas for his office's own Olympics being held during the fall busy time.

Hey amazing brain trust of Going Concern!
Our office is having an "office olympics" after dinners for a bit of time. Do you guys have any good ideas on what we could do??
So far we've done rubber band archery and paper airplane javelin.  Maybe fellow capital market servants have ideas that they can share?? Or maybe they'll just hate on the fact that we can't charge the time to clients.
(P.S. We're working weekends – it's busy season, so don't even start about how we "aren't working.")

First, I feel like you missed a real opportunity here – you neglected to have an elaborate, expensive, never-ending opening ceremony. For the first "day" of your Office Olympics, you should have spent the entire "day" with people dressed in stereotypical garb from a country that each participant drew out of a hat. The more offensive the outfit, the better. For example, if you drew the United States you more or less could dress up like Larry the Cable Guy. China would be represented by a man in a dark suit bending Larry the Cable Guy over a desk. Scotland would be William Wallace. You get the idea.
Also important – you'd have to come up with a committee to administer the games. This committee would have to be made up of the most corrupt, shallow, deplorable people in your organization. They would have to find equally corrupt people to officiate the games and mega-wealthy sponsors to pay for some of the equipment not readily available in your supply closet.
Now on to the events. I like your rubber band archery and airplane javelin offerings. Hopefully no one is donning an eye patch after those. Here's a few more ideas I pulled together:

Obviously, there would be medals, and medal stands but rather than national anthems, the gold medalists could select a song of their choosing that would be played over the intercom to the entire office. The closing ceremonies would be a raucous affair at your local pub where you can relive the thrill of victory and the agony of defeat.

Good luck with your games and, I shouldn't have to tell you this, but we'd all appreciate it if you sent us videos and/or photos of the events (wrestling and weight lifting, especially) and any injuries resulting from them.

Yesterday morning, Accounting Today published a few letters from readers sent in response to AT’s August 26 article titled Do we need accounting firms? Editor-In-Chief Daniel Hood specifically invited reader comment when he asked out loud if we can do without accounting firms and, as expected, there were comments to be had. Like Randy Crabtree, […]

Carillion Liquidators Roast KPMG: “A Competent Auditor Would Have Detected the Misstatements”