A new year is nearly upon us and with it comes not only the promise of a fresh start and possibly shedding a few pounds but — YAY! — new regulations! Here are just a few state-by-state to be aware of. Hopefully you are the type who keeps up on this stuff but if you're wondering if any new board of accountancy regulations might impact your CPA license, check directly with your state board NOW.

Changes to the South Carolina Board of Accountancy’s Regulations went into effect in May 2012. The Board made the decision to implement the changes on January 1, 2013. New South Carolina licensees not previously licensed in another state are exempt from the Ethics CPE within the three-year period they were licensed in due to the Ethics requirement they met to be licensed.

Below is the section of Regulation 1-08 that deals with the Ethics CPE:

Virginia Board of Accountancy fee increases:

Apparently the VBOA was on track to go broke by the end of 2013 and has decided to increase some fees in 2013 for the first time since 1991. Initial CPA exam application fees will remain the same. Full details can be found in the Winter 2012 VBOA Newsletter: 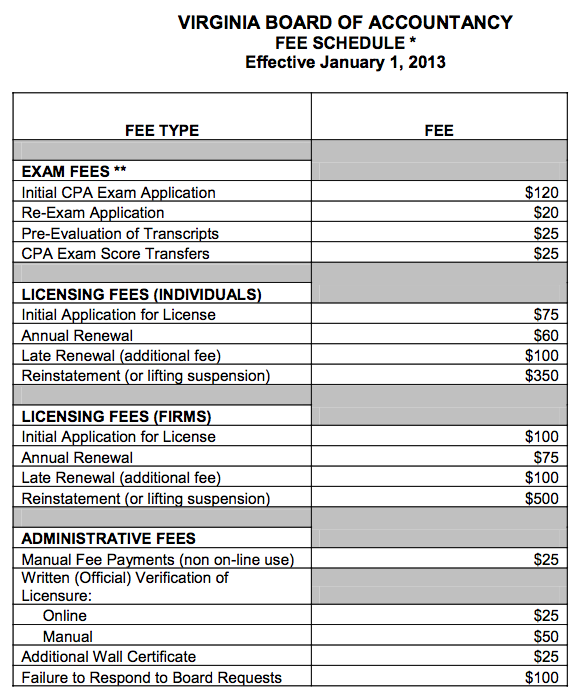 Mississippi will consider you in default and your license is subject to cancellation within ten days if you don't get your registration fees and paperwork on time. Alabama, however, will just charge you a $100 penalty for registrations filed up until March 31, 2013, $500 for registrations entered on or after April 1, 2013 and won't hold disciplinary hearings unless they haven't heard from your lazy behind by September. Not all states have to renew every year (Maryland CPAs, for example, have 2 years from the date they are licensed) so check with yours if you aren't sure. Of course, with Monday last business day before Wednesday and many of these things due Tuesday, you might already be too late.

The death of pencil and paper at Prometric:

Last but not least, no more pencil and paper at Prometric beginning January 1, 2013 as you guys already know. You should be over freaking out about this by now.