Dan Dennett announced to his LinkedIn connections about a month ago that he recently joined the black and yellow team. And here is his WFH battlestation: 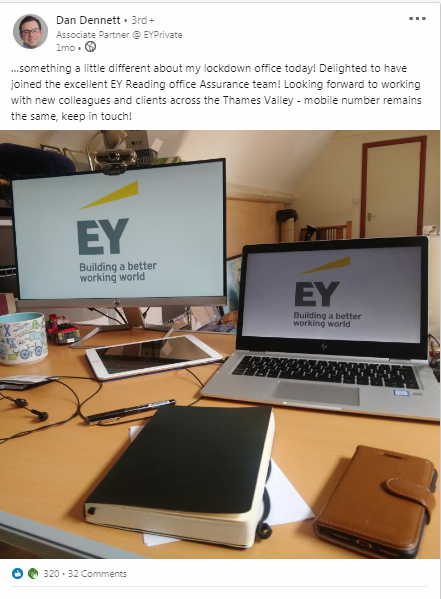 The newish EY associate partner is the focus of today’s edition of “Big 4-on-Big 4 Poaching From Around the World.”

Dennett joins the Queen’s EY from PwC U.K. where he worked the past nine years, most recently as a director in the firm’s assurance practice. According to a media release seen by Commercial News Media:

Dan is an experienced audit engagement leader and statutory auditor, having worked with a wide range of private and international business across the Thames Valley and West London regions. He has experience of working with business in various stages of development, from well-established private businesses to supporting companies through rapid growth, expansion and transactions.

In his new role, he will be responsible for developing client relationships and networks with private businesses in the region.

Two others joined Dennett recently in the Ernstiverse: Mike Reeves as an associate partner to lead the development and expansion of its services for clients in the private market across the South East region, and Louise Morley as a tax advisor on the People Advisory Services (PAS) team.

EY Poaches Someone From PwC and Issues a Press Release, Part I

After being called “lazy gits” in a tweet last Friday by British businessman, entrepreneur, and TV show host Lord Alan Sugar, who reacted negatively to PwC UK announcing that it would allow employees to take Friday afternoons off from June to the end of August, we were curious to see if any PwCers across the […]

The IRS Is Paying an Unwelcome Visit to Alliantgroup