Finally we have some Big 4-on-Big 4 poaching action here in the good ol’ US of A to write about, even though it involves a lateral move. After an 11-year stay at the House of Mickelson as a principal, Mitch Kenfield has joined EY’s Consulting practice in the same role.

He announced his recent departure from KPMG and arrival to EY on LinkedIn: 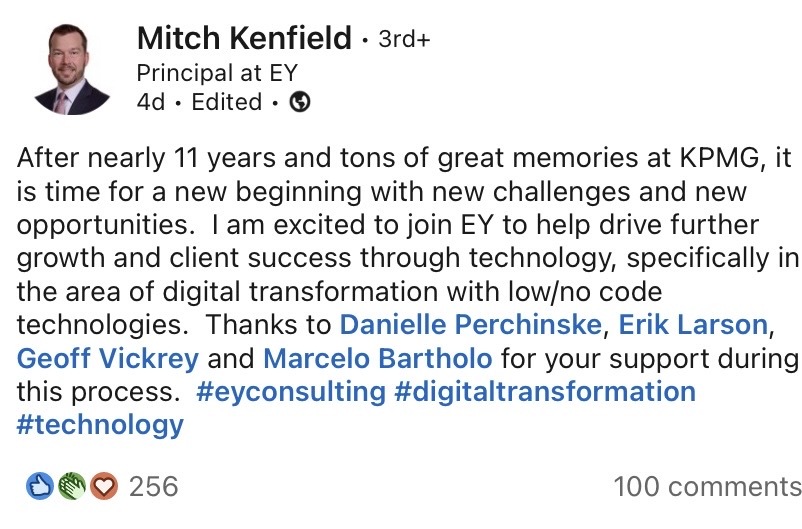 Kenfield, who served as an officer in the US Air Force, brings to EY more than 25 years of experience in advisory consulting and solutions development across several industries, including health care, retail and consumer goods, industrial manufacturing, government, media and technology, and financial services, according to his LinkedIn profile.

After a short stay at EB Networks, Kenfield went to BearingPoint, a former consulting unit of KPMG’s, in 2001, and during his tenure there, he was managing director of the firm’s Infrastructure Solutions practice.

Next up was Deloitte, which he joined in December 2008. Based in the Atlanta office, Kenfield was a managing director in Deloitte’s Technology Strategy and Architecture area, and served as the firm’s lead for IT service management offerings.

He bolted D-town in late 2010 to join KPMG as a principal in the firm’s Advisory practice. Maybe Mitch should tell KPMG he doesn’t work there anymore.

[UPDATE] Deloitte University, aka Deloitte Disneyland, will be getting some new attractions now that Tarrant County commissioners approved tax breaks for Deloitte to proceed with a $300 million expansion of its training center campus in Westlake, TX. The Dallas Morning News reported on July 26: Commissioners unanimously approved a 10-year deal that could save the […]