The Big 4 firm with a split personality officially announced today its fiscal 2022 revenue of $45.4 billion—a figure we knew several weeks ago thanks to the Financial Times.

EY has always seemed perfectly fine with being the third biggest accounting firm in the world by revenue, knowing it’ll never catch PwC for second place but content with the fact that it’ll always be bigger than KPMG. But if EY does split its auditing and consulting businesses into two separate entities, current indications are that the auditing business, which is expected to use the EY brand and have some tax people interspersed, would bring in less revenue than KPMG and it would fall to fourth place in the Big 4 revenue pissing match. Could this be the last third-place hurrah for EY, at least for a while? 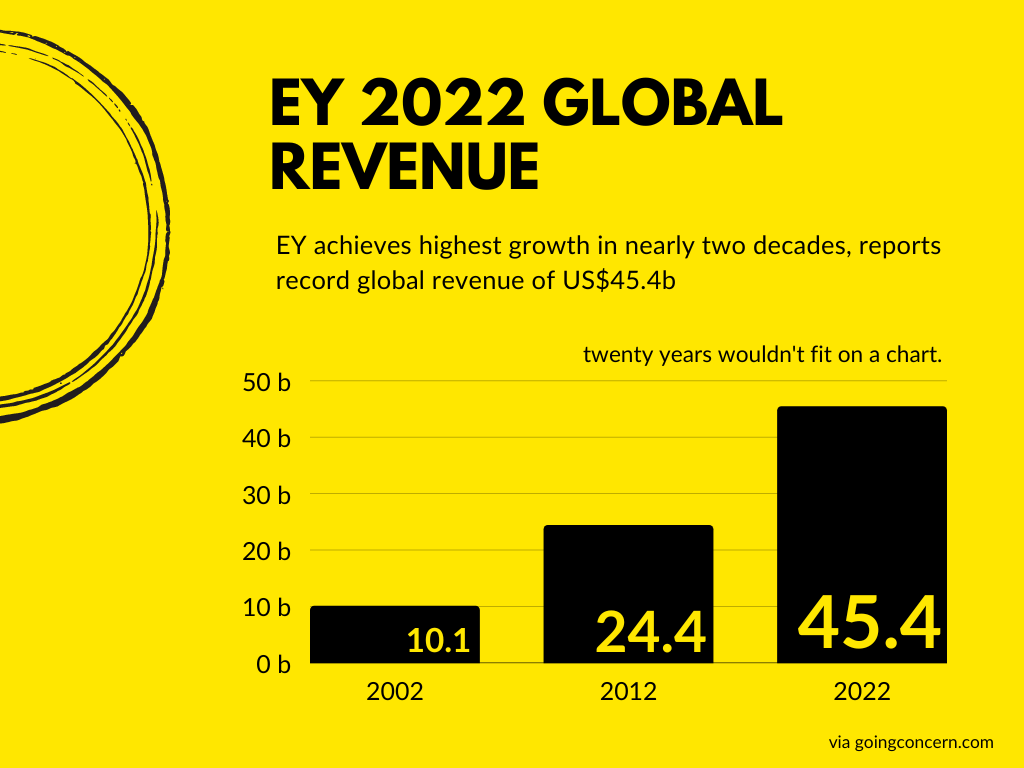 But will EY become the new KPMG? In terms of being the butt of many jokes the last few years, EY already is the new KPMG. But in terms of revenue, early projections would have the consulting-less EY start operating at between $18 billion and $20 billion if partners approve the split. EY, or “AssureCo” as it’s being referred to during in-house discussions, would then become the fourth biggest of the Big 4 in global revenue, bumping KPMG up to third place. In 2021 KPMG reported global revenue of $32.1 billion. AssureCo is projected to grow 7% annually. For comparison sake, KPMG has grown an average of 5.2% annually over the past five years. So it is possible that AssureCo (EY) could eventually grab third place back from KPMG. 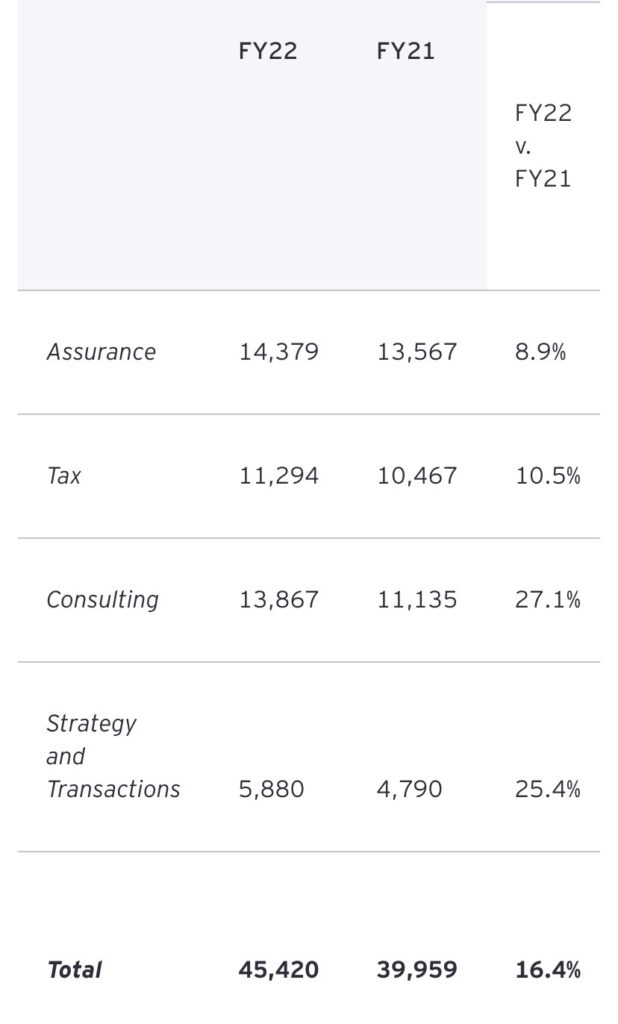 The spun-off consulting business, referred to in-house as “NewCo,” would start operating with between $25 billion and $27 billion of revenue, and grow at between 20% and 25% a year, if partners approve the Project Everest plan. Di Sibio & Co. believe the consulting business will grow more quickly on its own as it will be freed from its conflict of interest shackles that prevent it from working for the firm’s audit clients. However, it would not be allowed to use the EY brand. 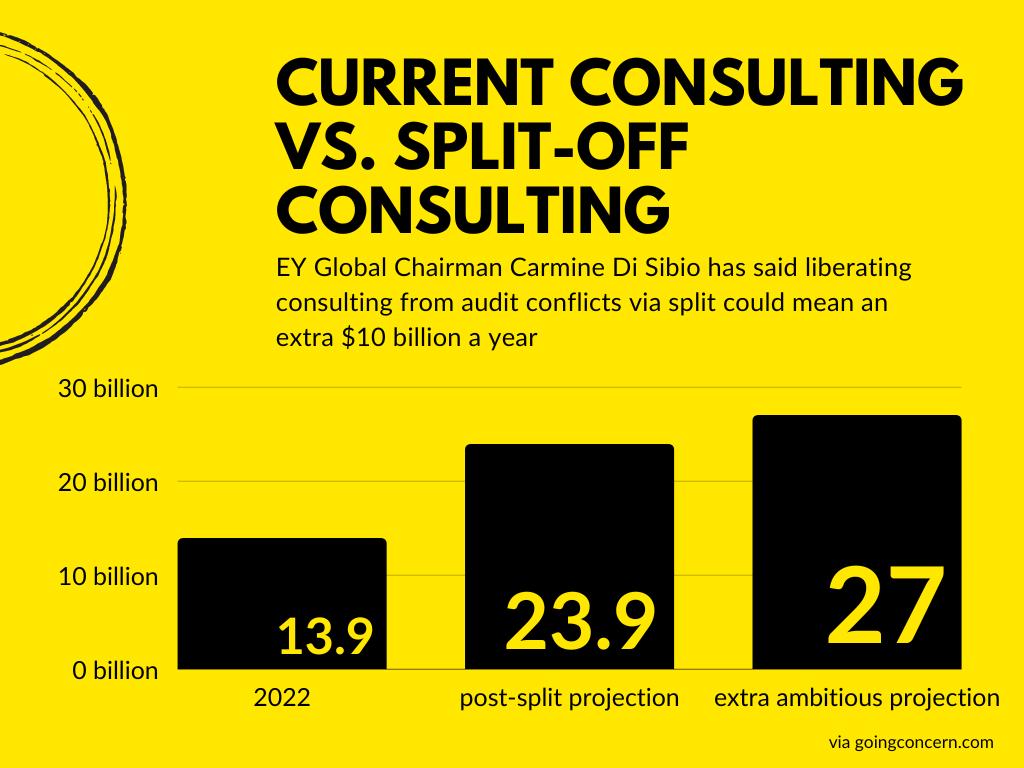 As the Financial Times noted today, the Big 4 don’t publish their global profits, but EY would be required to disclose detailed financial information for its consulting arm ahead of a planned initial public offering of the business next year. FT continued:

Under the planned split, its standalone advisory business would begin with revenues of $25bn and ebitda of $4.4bn, according to figures shared with partners last week.

Advisory partners would be awarded shares in the new businesses but would be forced to take hefty pay cuts.

The audit and assurance division, which is expected to keep the EY brand, would remain structured as a partnership after the spin-off of its advisory practices. Some experts in tax, valuations and other disciplines would be retained to help with audits.

Audit partners would receive cash windfalls to compensate them for parting ways with the consultants.

And here is what EY said about the potential split in today’s revenue press release:

EY leaders have now recommended that the organization evolves into two distinct, multidisciplinary organizations. One would be a global network of multidisciplinary member firms committed to assurance, tax and advisory services with all the capabilities required to deliver high-quality audits, serve the public interest and focus on the CFO agenda and sustainability; and the other would be a new global corporate entity comprising Consulting, Strategy and Transactions (SaT), the majority of Tax, and managed services.

In taking this bold step, EY can better serve EY people, clients and broader stakeholders in a once in a generation opportunity to redefine the future of professional services. This move will create better and more dynamic career opportunities; people can learn more, take on new roles and explore different mobility options.

It would mean increased access to capital to reinvest in people and client services and solutions, with a laser focus on the issues that matter most to clients and stakeholders.

It would also mean more choice for clients for both audit and transformation services, and an even stronger focus on ESG priorities, as well as more opportunities to develop new corporate responsibility programs – such as co-investments in “green” projects – so that we can make an even bigger impact in the communities in which we operate.

Both organizations will be values-focused and purpose-driven, and both will preserve the strong EY culture and commitment to DE&I.

EY will now engage in more detail with EY member firm partners, whose votes will determine whether we move forward.

EY Americas is the biggest revenue-generating region: The Americas region brought in nearly $21.1 billion in 2022, ahead of the Europe, Middle East, India and Africa (EMEIA) region ($17 billion) and Asia-Pacific ($7.2 billion).