Yesterday we told you about the big poaching spree by Deloitte Australia, as the firm recently added six new partners to its risk advisory business. Most of that kontingent is komprised of soon-to-be former KPMGers who will officially join Deloitte in October. But another one of the six came from P to the W to the C.

Nicole McDonald is now a partner in Deloitte specialising in digital and technology risk. The 41-year-old worked at PwC for almost two decades, rising to director in the firm’s management consulting business. She spent more than a decade working across Hong Kong, China and Singapore while at PwC. She is now based in Sydney.

McDonald said goodbye to her colleagues at Seymour & Co. on LinkedIn a few weeks ago. 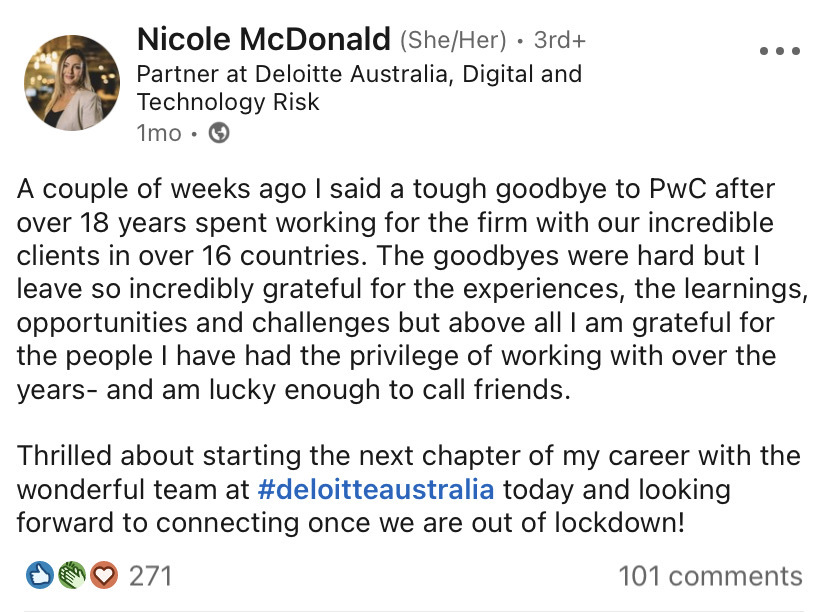 It might be winter in Australia but the Big 4-on-Big 4 poaching scene Down Under is pretty hot right now. McDonald was at PwC for about 19 years. You’re telling me she didn’t deserve an invite to the partnership at any point during that time? Good for her for getting that promotion (and money) elsewhere.

Deloitte Poaches Someone From KPMG and Issues a Press Release, Parts I, II, III, and IV