Remember how a Mexican subsidiary of Citigroup kinda loaned a few hundred million to a shitty oil company? No? Allow us to refresh you:

Banking giant Citigroup cut its fourth quarter and full year 2013 estimates on Friday, as its profit was hit by fraudulent activity at a Mexico-based subsidary.

The bank said in a statement that Banco Nacional de Mexico, or Banamex, had loaned $585 million in short-term money to a Mexican oil services company named Oceanografia. It was later discovered that the firm had been suspended by the government from being awarded new contracts,

"Based on Citi's review…Citi estimates that it is able to support the validity of approximately $185 million of the $585 million of accounts receivables owed to Banamex by Pemex as of December 31, 2013," the bank added.

As a result of the incident, Citi will take an estimated $235 million after-tax, or $360 million pre-tax, charge against last year's earnings. The impact will lower 2013 net income from $13.9 billion to $13.7 billion.

Never one to miss out on the opportunity part of the fraud triangle, everyone's favorite unrepentant felon Sam Antar reached out to Citi looking for a little handout of his own. That's not the good part (anyone who follows Sam on Twitter knows Sam has dedicated himself to the fine art of trolling). The good part is that Citi actually took the bait: 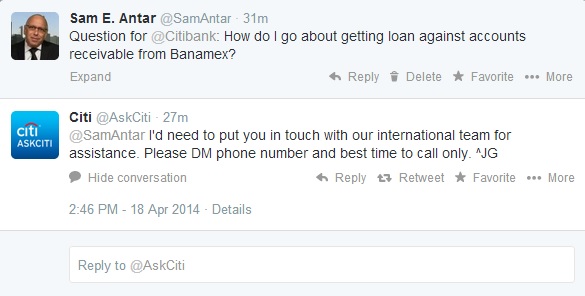 We have a feeling Sam is going to take this as far as Citi will let him, we'll keep you posted on any developments.

Someone sent us this r/accounting thread on returning to the office the other day and wanted to make sure we call out one comment in particular. You’ll see why in a second. The question of what would motivate you to go back to the office has been asked before, in a multitude of ways, and […]

For a good decade we’ve heard about the robots that are going to render accountants obsolete, now we finally get a peek at the glorious technology that will transform the industry as we know it. You should prepare yourself, this advanced technology will have you on the University of Phoenix website ASAP to get a […]