I was tempted to start this post with “it’s hard to believe it’s already 2022,” but you know what, time has been pretty nebulous for at least the last two years, if not longer, and it really doesn’t even matter anymore. It’s as if the aliens who run the simulation cranked us up a la Joe Potter’s eternally trapped cookie in Black Mirror’s White Christmas, but whatever, we’re not here to talk about time distortion (here is an interesting read on it if you want one though). Now that we’re sitting squarely in 2022, whether we like it or not, the huge CPA exam change ahead that seemed so far away when it was first dreamed up in 2019 is a mere 21 months away.

I sincerely hope you didn’t read that last sentence and ask “what change?” because you should know by now that the CPA Evolution launch is going to be the most significant change to the CPA exam since it was computerized in 2004 (early happy birthday to the computerized CPA exam btw, it turns 18 in April). Bigger, even. If you need to catch up, you can find a wealth of information on it that will keep you busy well into 2024 at the official CPA Evolution site.

Alright we get it, it’s a big change. Today we’re here to talk about what’s going to happen to your passed sections if you’re still in the middle of your CPA exam journey when this fancy new redesigned exam hits.

Thankfully the benevolent overlords of CPA licensure do not want you going into this blind and have revealed the transition policy for any current candidate who has not passed all four parts of the exam by December 31, 2023. You’ll note that as long as you are done by that date, none of this applies to you so if there was ever a time NOT to procrastinate, the next 21 months would be it. I’m going to mention something scary here. Don’t get freaked out but 18 months from January 1, 2024 is only four months away. Meaning it’s not only possible but very likely that at least some of you starting your CPA exam journey this year will be affected by this transition as you could potentially have parts nearing expiration at the beginning of 2024. So pay attention.

You know, usually when people say things are “quite simple” it ends up being some overly complicated side quest complete with algebra problems, hypotheticals, and enchanted cats gifting you magical items with rare buffs, but in this case it really is quite simple. BEC is the biggest wrench in the works as the three disciplines are new, and instead of BEC, candidates will choose one of these disciplines to be tested on. They are:

As mentioned above, if you have pre-2024 passing credit for BEC then you don’t have to worry about disciplines as long as you pass the other sections before that credit expires. I’m repeating this so you get in your head that it would be a very, very good idea to pass BEC by the end of 2023 if you can.

In case blocks of text are confusing, here’s a nice visual representation: 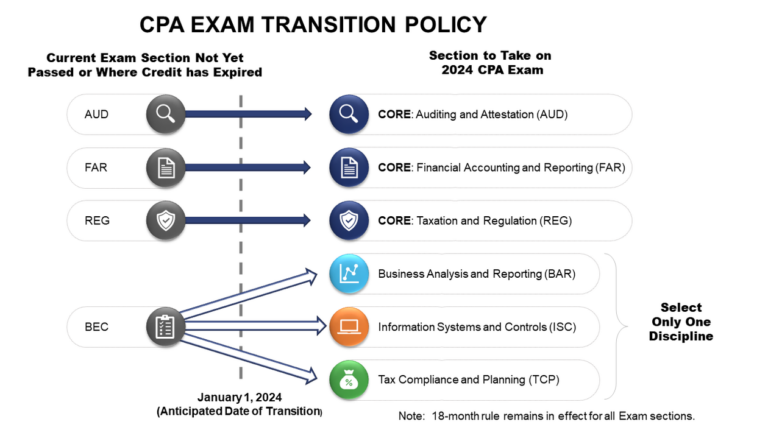 The biggest takeaway here is that if you can, then you should do everything in your power to be done by December 31, 2023. Why? It’s just easier. We like easy. Easy is good. While the core exam sections of 2024 may have the same names as current ones, new blueprints are expected this summer and content could be significantly different from what’s tested today. We’ll keep you updated on that when we hear more, but for now you can browse the transition FAQ for a bit more info. But if you can’t pass all four parts by the end of 2023 I wouldn’t sweat it too much either; the exam will be redesigned, yes, but at the end of the day debits will always be on the left, so even with a new format and updated blueprints, the basic stuff that’s been tested since the dawn of time will still be around.

And now you’re officially caught up on the CPA Evolution transition policy, so plan accordingly. With time being what it is, it’ll be 2024 before we know it.

Photo by Tima Miroshnichenko from Pexels