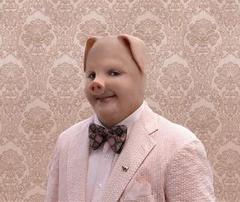 Recently, a Feed the Pig commercial aired during a broadcast by everyone's favorite far right wing hot air machine Rush Limbaugh and apparently there is a select group of dedicated folks who make it their mission to boycott every advertiser on said hot air machine's show. Hey, to each his own, frankly I don't care about the guy either way.

The outrage that peppered the AICPA's Facebook page following this broadcast – while well-intentioned – is pure comedy. Case in point, this guy:

Now, as far as I can tell, Hernan is not a CPA. So I'm not sure what products he's referring to, unless he planned on purchasing the AICPA's book The Inside Track to Careers in Accounting. Or maybe he decided he's not going to take the CPA exam after all (although as far as I can tell, he never planned to). That'll show the AICPA just how outraged he is!

Now, some folks – equally outraged – get the idea: 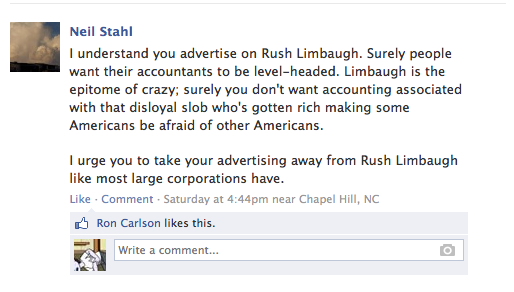 The general idea here is that Rush is a racist, woman-hating bigot and NO ONE WANTS THEIR ACCOUNTANT SPEWING RACIST, WOMAN-HATING GARBAGE amiright?

This all started on Saturday when the anti-Rush bots called in the troops to blow up the AICPA with complaints. And man, ARE THEY MAD. How dare they! I just can't believe it! This is SO SO wrong!

But wait a second. Feed the Pig is not just the AICPA's problem, it's an Ad Council campaign. And the Ad Council runs all kinds of PSAs all the time all over the country. Benjamin Bankes isn't an AICPA spokespig, he's a helpful (if freaky) representative for financial literacy, damnit, not hate and racism!

The AICPA cleared it all up on their Facebook page yesterday (of course, these people are all too outraged to read it):

Feed the Pig is an Ad Council campaign, and all Ad Council PSAs air in donated, not paid media. Hundreds of stations throughout the country that find themselves with unsold inventory donate this time to the campaigns' critical messages. The Feed the Pig messages are apolitical and we feel important that they be heard. They raise much needed awareness on an issue all Americans should be exposed to. Our campaign does not purchase advertising nor do we endorse any programming content.

We hope this clears up any misunderstandings. Thank you for being a part of our incredible community and for sharing your thoughts and concerns!

Got that, folks? Your little boycott is working really well because companies are scared to advertise on Rush's show, meaning there's plenty of dead air available to fill with PSAs. And you are cockblocking an effort to get Americans to save a few extra bucks! Who is the jerk now?! Well, Rush is still a jerk but that's not the AICPA's fault.

So, let's all take a deep breath and, oh, I don't know, try a little research before we blindly jump on the "I hate this guy so much I could punch a CPA in the nuts" bandwagon. Do it for Benjamin Bankes.