So this guy and his wife walked into MZ BIZ Tax Services in Houston last Thursday to complain about something or another regarding the tax return the business prepared for them. An argument ensued, with the owner of the business allegedly telling the couple to “get the hell out.” The wife left but the man stayed to continue his bitching. He probably never expected the owner to pull out a handgun and point it at him and then witness said owner take the cellphone of another client who was filming the altercation, smash it to pieces, and then hit that client with her gun.

Latunya Wright, 46, was arrested and charged with two felonies after Harris County deputies responded to a disturbance at MZ BIZ Tax Services on Kuykendahl Road in north Houston on Thursday.

Wright allegedly got into a verbal altercation with a customer “that turned physical,” the Harris County Constable Precinct 4 said in a statement.

“Investigation revealed that she struck the victim with a firearm that she brandished during the altercation,” the precinct said.

The criminal complaints allege Wright threatened a man with “imminent bodily injury” by displaying a firearm and also injured a woman and exhibited a firearm while stealing her property.

The woman who was recording what was going on between Wright and the man, Marquita Boyle, was also at MZ BIZ Tax Services to discuss what she says was wrong information sent to the IRS, according to ABC News.

Boyle told ABC News that Wright “had the gun pointed at him, and then she turned around with the gun and she actually cocked the gun.”

According to the Washington Post, Boyle said another couple sitting in front of Wright’s desk tried to calm her down before she walked up to Boyle and asked her to stop recording:

At that point, a struggle ensued and, according to Boyle, Wright violently pulled her phone away.

“When she snatches the phone she says … ‘You can leave. You can get the hell out,’ ” Boyle said. “This is my first interaction with Latunya Wright. I hadn’t even sat down.”

Then, Boyle said, Wright hit her in the head with an object she couldn’t see. Police later said that Wright had hit Boyle on the head with the gun. Wright deleted the video before throwing Boyle’s phone to the ground, shattering its screen, Boyle said.

Boyle was later transferred to a hospital to treat a head injury, according to WaPo. And the video Boyle recorded was salvaged and given to authorities.

Wright was charged with aggravated robbery with a deadly weapon and aggravated assault, according to WaPo. She was released after posting her $70,000 bail. She then went on Facebook and posted a message from her business’s account. I couldn’t help but LOL at the first comment that appeared: 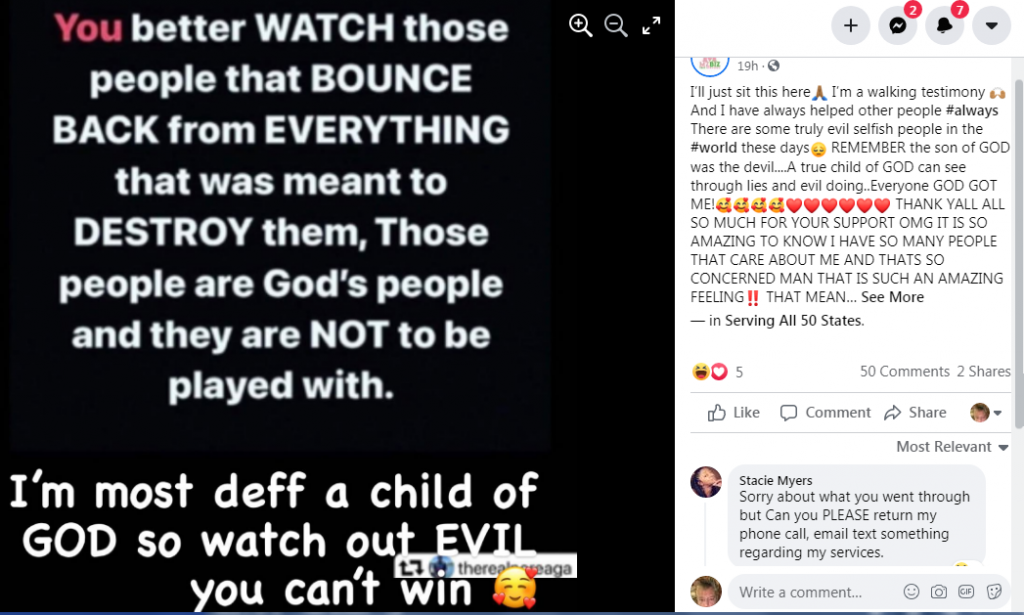 Before Wright started MZ BIZ Tax Services in Houston, she lived in Missouri, and on May 3, 2012, she was sentenced to 51 months in federal prison for helping move and hide millions of dollars taken in a 2010 heist of an ATM sales and services company.

Wright was due back in court today.

Houston tax preparer allegedly brandished gun at customers who complained about filings [ABC News]
A woman complained about her filings. The tax firm’s owner hit her with a gun, police said. [Washington Post]