Latest
If You Are Young, Male, and Taking the CPA Exam We Have Some Good News For You Things Are Getting Spicy Between PwC UK Employees and Lord Sugar Compensation Watch ’22: Big 4 Firm With the Most Negative Publicity In the U.K. Tries to Change All That By Giving Staff Raises of At Least £2,000 Back In My Day, Accountants Had to Walk Uphill Both Ways In the Hot Sun to Get to Work, Says Crotchety Old British Guy Friday Footnotes: Firms on India Hiring Spree; PCAOB Heads Overseas; PwC Lets You See Your Family This Summer | 5.6.22

Not content to be left out of the conversation on flextime, EY has jumped right into the fray with a New York Times piece on telecommuting and flexible work arrangements. Let's check in with suburban warrior Jared Dalton:

He calls it one of the bright spots of his week: Before Jared Dalton, 32, starts his workday as a manager at Ernst & Young, the big accounting firm, he dresses his 5-month-old daughter, Olivia, and then places her on her tummy to play. Since he works from home on Mondays and Tuesdays, he can spend an extra hour with Olivia and an extra hour working — time that would otherwise be lost commuting into Manhattan.

When the nanny arrives at 9 a.m., he sequesters himself in the guest bedroom that doubles as his office. His wife, Christina, telecommutes from their Port Washington, N.Y., home on two different days, and her mother cares for Olivia on Thursdays.

“We needed the ability to be home and attentive should something come up, rather than being an hour away and at the mercy of public transportation,” Mr. Dalton said. “Working from home ensures I am able to get in those extra hours rather than have to do them at 10 p.m. to 12 a.m.”

Look at this photo and tell me you don't feel like this guy is living in telecommuting purgatory: 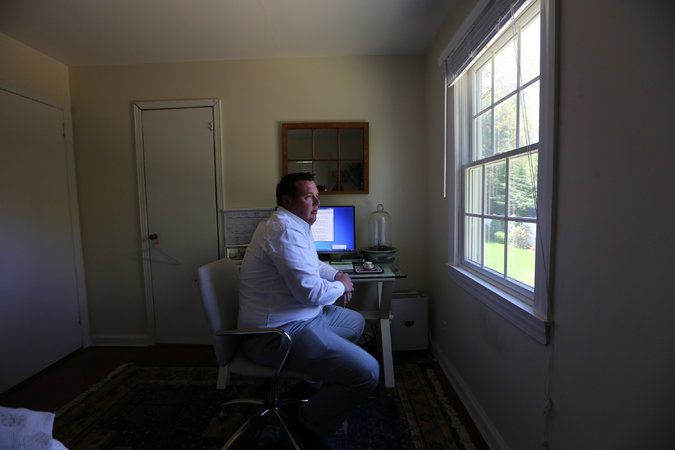 Then, here comes the inevitable PR spin. We're flexible! For the love of Luca Pacioli, didn't we just read nearly identical flextime spin not even a week ago? Yet here's EY, slopping the media trough with the same old garbage:

To be truly successful, flexibility needs to be ingrained in the employer’s culture and seen as available to workers of all stripes. Mr. Dalton’s employer, Ernst & Young, and the accounting industry as a whole, are known as pioneers in workplace flexibility. Their program, which dates back to the early 1990s, was put in place to retain women who were leaving at a rate that was 10 to 15 percentage points higher than men. Women typically left just as they were starting families, which happened to coincide with when they were eligible for big promotions. Now, women leave at a rate that is just 2 percentage points higher than men, the firm said.

Two decades after the start of these programs, accounting industry executives say flexibility has become so embedded that many of their employees use these options without a formal arrangement. About 2,800 workers, or more than 5 percent of its roughly 53,800 employees in North and South America, Mexico and Israel have formal, documented flexible arrangements, like Mr. Dalton. Just 20 percent of the employees using flex time are men.

“It’s an intensive career choice, so we had to offer flexibility to make it an attractive career choice,” said Karyn Twaronite, a partner at Ernst & Young overseeing diversity and inclusiveness. “We were trying to solve a problem.”

As someone stated on an earlier piece about accounting firms leading the nation in talking about flextime:

The reason 'flex time' exists is because public accounting does not allow for enough time off over the normal course of the week to allow their staff to do human being stuff. No one would need 'flex time' if they work reasonable hours in the first place.

There is something horribly wrong when we think that 'flex time' to eat dinner with the family only to log on later and work till midnight at home is a good thing.

Getting back to Jared, why would a commute into Manhattan mean he needs to work between 10 p.m. to 12 a.m.?? His infant probably only just started sleeping more than 2 hours at a time and he's got to log on at midnight to get work done? Yeah, sounds super flexible to me.

Coming in at No. 52 on the 2022 Fortune BCTWF is the ol’ Black and Yellow. EY has made quite a few head-scratching, unpopular decisions over the last couple of years, but here they are on the BCTWF for the 24th time in the ranking’s 25-year history. While doors will open for someone with experience […]

Remember last week when EY tried to convince all of us that employees prefer empathetic leadership over raises and promotions? LOL, good one EY. Anyway, Brandon Hall, founder and managing partner of Hall CPA in Raleigh, NC, who was a senior consultant with EY earlier in his career, knew the empathy-over-raises social media post from […]

If You Are Young, Male, and Taking the CPA Exam We Have Some Good News For You

Things Are Getting Spicy Between PwC UK Employees and Lord Sugar