It’s mid-January, which means that at some point in the next four to six weeks or so, you’ll say to yourself, “I don’t get paid enough to do this shit.” And you might be right! But the good news is starting salaries for accountants keep going up. If you’re simply annoyed with your current boss/lunch/life then it’s entirely possible that you’re just venting about your measly compensation and, in reality, you’re simply curious to know if you really are getting paid enough to “do this shit.”

Well, an enterprising Big 4 employee took it upon himself to crunch a few numbers (via Excel, natch) to give you a rough measuring stick of what your compensation might look like over the first 15 years of your career.

While trying to divert my attention to studying for AUD I started to look up salary information to bring myself to peace with after listening to Peter Olinto.  Using Glassdoor, Internet forums, this site, and [this post] I put together a spreadsheet and chart that shows the expected compensation one would get in a Big 4 firm over a 15 year period. What I was mainly trying to get at is the average year over year salary increase when you include partner compensation. Everything is estimated (except my starting salary) and I used 450K as the amount a senior partner would bring in.  It will obviously vary but I had to pick a number.
I found average increase in salary is 17% (e^ln(450000/50000)/15) which I would say is higher than probably any other field with the exception of high finance. 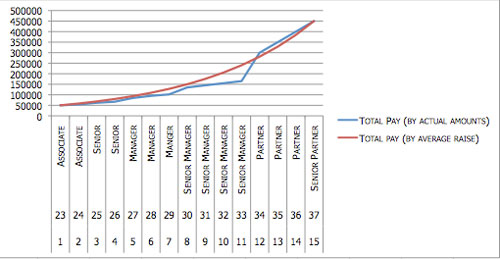 So, everyone is welcome to critique this little analysis as you see fit but I’ll just point out a few things that I noticed:
1. I think a third year at Senior Associate is typical amongst the Big 4, as is two years as a manager before scratching up to Senior Manager. Accordingly, the jump from $67k to $85k is premature and that $18k increase is a little generous.
2. PwC typically requires three years at associate before promotion, so that would have to be taken in account.
3. Four years is probably the minimum amount of time you can expect in the parking lot known as “senior manager,” in fact, I’d say year 15 might be the more reasonable starting point for a partner. That varies by office but in general, partner by year 12 is fairly quick.
4. $300k as a first year partner is probably a little high, as is the jump from $165k to $300k.
All in all, it’s a decent place as any to start a debate and 17% for an average raise over the course of 15 years probably isn’t that far off. Is it better than other industries (other than high finance, which isn’t as good as it used to be)? Hard to say. Law is probably, on average, slightly better but it’s hard to say definitively, as lawyers’ quality of life is exponentially shittier than accountants’. But then again, who cares about that? It’s really all about the numbers, isn’t it? Reactions are welcome and feel free to dicuss your prospects below.

Citigroup has launched a new program in which a few dozen young analysts will trade big investment banking salaries for shorter work days in Málaga, Spain, a beautiful city on the southern coast known for its food, culture, and lovely weather. The best part? The analysts might even have some time to enjoy the scenery. […]