There’s a disturbing social media trend afoot, and no it’s not sex workers claiming to be accountants on TikTok. Over the last few years, LinkedIn has gone from a useful tool for professional networking to Letters to Penthouse for business.

Y’all know what I mean. The long, rambling posts littered with hashtags — often written by recruiters or various “coaches” — that are supposed to impart some kind of life lesson about the value of persistence or hard work or the tenacity of job-seekers/homeless people/single mothers. There’s a whole subreddit chronicling these self-serving tales, and chances are if you’re connected to more than a dozen people on LinkedIn, you’ve seen at least one.

r/LinkedInLunatics is where I first saw the following post, and there’s also a good teardown at r/Big4: 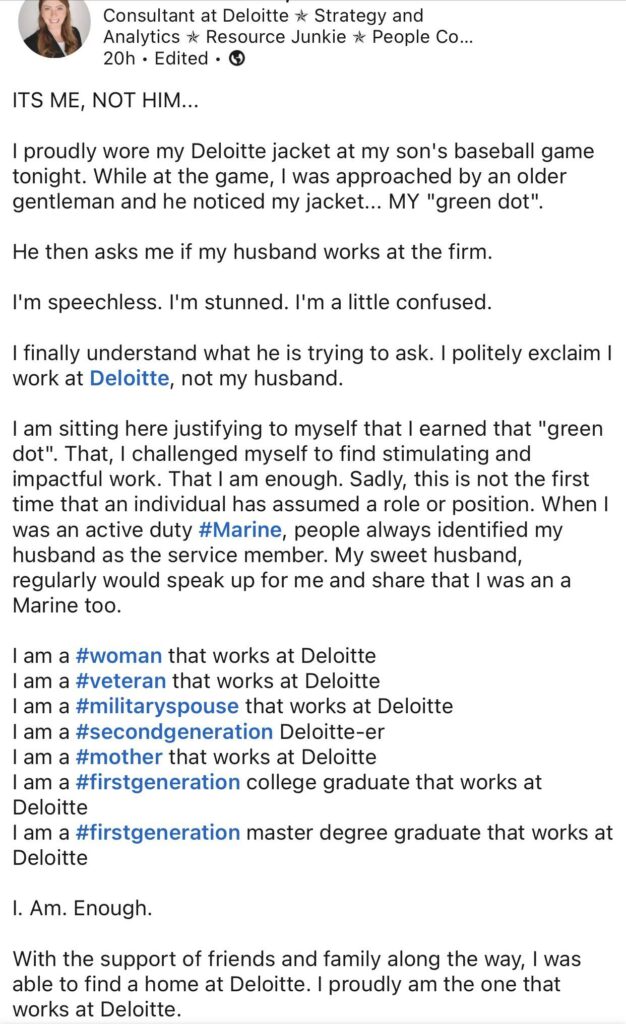 I proudly wore my Deloitte jacket at my son’s baseball game tonight. While at the game, I was approached by an older gentleman and he noticed my jacket… MY “green dot”.

He then asks me if my husband works at the firm.

I finally understand what he is trying to ask. I politely exclaim I work at Deloitte, not my husband.

I am sitting here justifying to myself that I earned that “green dot”. That, I challenged myself to find stimulating and impactful work. That I am enough. Sadly, this is not the first time that an individual has assumed a role or position. When I was an active duty #Marine, people always identified my husband as the service member. My sweet husband, regularly would speak up for me and share that I was an a Marine too.

With the support of friends and family along the way, I was able to find a home at Deloitte. I proudly am the one that works at Deloitte.

Hmm I wonder where she works.

In what kind of back-assward Stepford swamp hole does this woman live where random old guys start hassling women over their jackets? And what’s she doing at a baseball game anyway, shouldn’t she be at home working?

The odds of this exchange actually happening are practically nil. No one gives a shit about your Deloitte jacket except you. And what civilian would recognize a Deloitte logo in the wild, anyway? If he did, then we can assume he either worked at Deloitte or was a client, in which case surely he interacted with at least one woman employed by Deloitte since that’s a thing that has existed since at least 1923. Lastly, as a female Marine she should be more than used to people making assumptions about her capability as a woman and therefore anything but speechless, stunned, and confused when some wrinkle-balled weirdo comes up to her babbling about how women belong in the kitchen and not the boardroom.

Photo by Andrea Piacquadio from Pexels