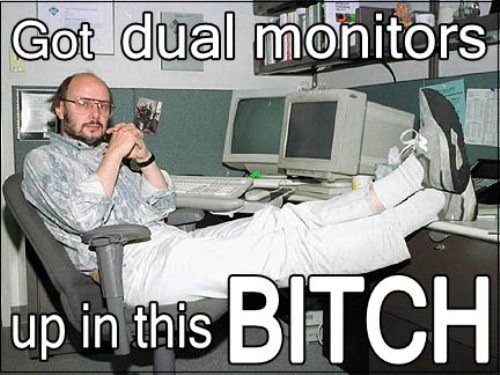 Back in October, we learned that PwC auditors had finally whined loud enough to earn a second monitor. Up until that point, it was only by the grace of God that anyone was able to accomplish anything and it probably explains the firm's dreadful PCAOB inspection results.

Some found it strange that a firm of Papa Whiskey Charlie's stature would just now being throwing another screen to its army of opiners. After all, a second monitor fell like manna to McGladrey auditors several months before the PwC announcement. Firms of lesser prominence have been arming their own employees with monitors long ago. But this is neither here nor there.

The unfortunate situation that remains is the accountants — not just auditors — out there who are serving the capital markets without a second monitor. They have to exist in this world with a solitary screen that barely allows them to view a spreadsheet of 20 rows before having to scroll. The thought of it is heartbreaking, especially when you consider that there are only so many billable hours in a day*.

How do we best help these unfortunate souls? Rather than rely on anecdotes as evidence, perhaps science will convince their overlords that true productivity demands more screens. In a productivity myth debunking post (whole thing is worth a read), Lifehacker has a rundown of some studies on the subject:

A number of the articles several years ago pushed the idea that multiple displays make us more productive, but the studies they were based on concluded something very different. Here's what they actually said:

Okay, so the results are mixed; how do you best spin this?