Latest
The IRS Is Paying an Unwelcome Visit to Alliantgroup (NEW UPDATE) Dhaval Finally Emailed His Troops It’s Official, the Only Way to Get a Decent Raise Is by Leaving Your Firm Former and Current Alliantgroup Employees Speak Out About ‘Evil, Toxic, Emotionally Damaging Company’ Which Big 4 Firm Had the Most Elijah Watt Sells Award Winners in 2021? Are You Future-Ready? Learn How to Get There at This PICPA Event

[Updated original post from Sept. 28 with additional information on PwC Australia’s internal investigation. Update is at the bottom of this article.]

Australian Financial Review has a blockbuster of an exclusive this morning, one that involves “a human resources executive dressed as a bat from Wuhan” and a senior manager of diversity and inclusion mocking Chinese accents at a PwC Australia trivia event last week.

The virtual trivia was run by members of PwC’s human resources team as a work event for the national infrastructure division.

These senior staff members’ responsibilities include improving diversity at the firm and being part of the complaints process for staff who feel they have faced racial discrimination or harassment.

Let’s rewind. The event was run by members of PwC’s human resources team whose responsibilities include improving diversity at the firm and being part of the complaints process for staff who feel they have faced racial discrimination or harassment. I can totally see why a leader of this event would think it’s a good idea to dust off the ol’ bat costume because LOL Wuflu, amirite?! Oof.

In a statement to AFR, PwC Australia CEO Tom Seymour said that this behavior “did not reflect the values and culture of our firm” and that he is “extremely disappointed that this incident has occurred.” You’ll note he added that offending some staff was “unintentional,” which makes us wonder if senior staff doing this intentionally might actually be marginally better since it can be written off as assholes meeting expectations rather than morons doing racist things at firm events and being surprised when people get offended. 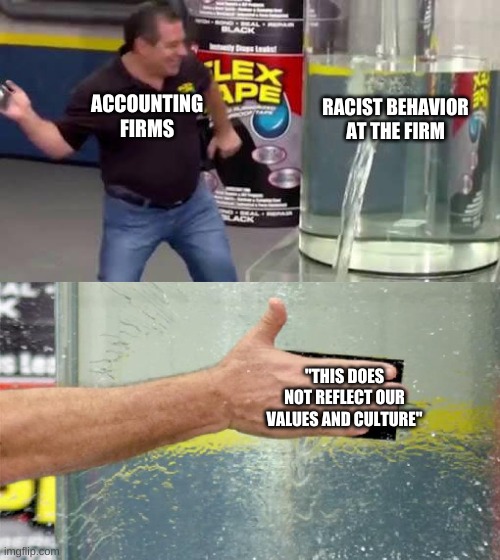 Thanks to the brave souls who brought this incident to the attention of the media, PwC Australia has opened an internal investigation which will no doubt lead to much hand-slapping and tsk-tsking directed at the offending (no pun) individuals.

The firm’s leadership team met on Saturday morning after becoming aware of the event on Friday, with Mr Seymour emailing all partners about the incident on Monday.

He also held a town hall meeting on Monday afternoon in which he apologised to everyone who had attended the trivia event, and further firm-wide communications were sent on Tuesday.

Staff members at the town hall meeting were initially frustrated by suggestions from the leadership team that an internal investigation may take weeks to resolve, with one telling the Financial Review that the matter should be better prioritised.

Prioritized it has been, with the firm telling AFR it will be fast-tracking the investigation and expects to make its findings sometime next week.

This whole thing brings to mind how KPMG UK chair Bill Michael had to quit after comments he made to staff in a virtual town hall earlier this year were made public, which eventually led a firm vice-chair to say KPMG is actively discouraging staff from going to the media when the firm does something stupid. Perhaps PwC Australia will be the next firm to need a good roll of Flex Tape to stop the leaky sieve.

UPDATE: Australian Financial Review reports that the employees involved have been fired and “the partners associated with the incident have been financially penalised as part of CEO Tom Seymour’s response to the scandal.” Read more here.

[UPDATE 12] Alliantgroup co-founder and CEO Dhaval Jadav, who apparently hasn’t been at work since the IRS and the FBI raided his business’s Houston headquarters last Friday morning, sent an email to all Ag employees at about 10:20 p.m. Wednesday night with the subject line: To Our alliantgroup Family. Several sources have sent us the […]

It’s Official, the Only Way to Get a Decent Raise Is by Leaving Your Firm