Latest
Where TF Is the IRS Supposed to Find 87,000 Agents? How Do You Know When It’s Time to GTFO of Big 4? One Manager’s Opinion Monday Morning Accounting News Brief: PwC Gets Fined; Big 4: What’s the Scam?; The IRS Straps Up | 8.8.22 Friday Footnotes: A World Without Accountants; GAO Finds a Big Mistake; ‘Fazbie’ | 8.5.22 Spreadsheets Suck, Say Clients

Louder this time, for the people in the back.

I find it fitting that one of my last posts as editor would be about career-limiting moves. When I started Going Concern, many people probably thought that I was making a big mistake; that writing critical things about Big 4 firms and airing their dirty laundry would be a severe detriment to my future employability. To a certain extent, I suppose those people are right; it’s highly unlikely that I’ll be working at a Big 4 firm or any accounting firm anytime soon. But that’s okay, I’ve left that possibility behind.

However, if you’re making a go of an accounting career, specifically as an auditor of public companies, there seem to be pitfalls all around you. It’s strange, though, because these pitfalls should be pretty easy to avoid. A few rules of thumb:

I mention that last one because the PCAOB issued a couple of disciplinary orders last week where auditors obviously couldn’t help themselves and went ahead and improperly changed audit workpapers. In each case, the person who did the improper altering was fired.

Likewise, don’t do what Elliot Kim, formerly of KPMG, did: 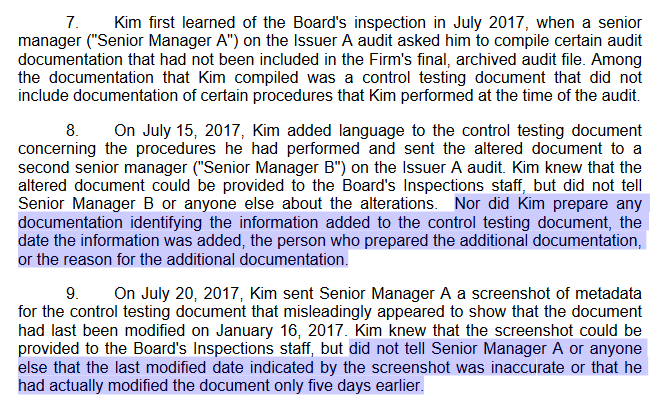 To make matters only slightly worse, “Kim did not correct Senior Manager B or otherwise disclose that the screenshot was inaccurate,” when PCAOB inspectors asked about it. The firm found out later that that was the case, and they fired Kim.

Both of these guys succumbed to the temptation to try to fix an error. But why? The PCAOB has already explained that not doing something is probably better than doing something:

I suppose it’s possible that in each of these instances, the impropriety may not have been discovered, the inspection result would have been slightly worse, and Sanderson and Kim would not have been fired. But why take the risk? It seems to be way less risky to accept the fact that a mistake in documentation was made, let the PCAOB discover it, add it to their list of infractions, and keep your job. Similarly, if they felt pressure from their superiors, it seems like any repercussions wouldn’t be as serious as getting fired. Sure, it might result in a lousy performance review, but chances are you were going to get a lousy performance review anyway.