Have you seen the cover of the February 2020 Journal of Accountancy? Just in case you don’t feel like digging it out of the mailbox (or out from the bottom of the birdcage), here you go. 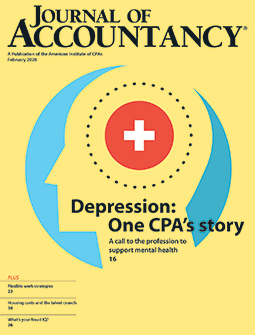 Not only did the JofA choose to do an article about this important topic, but they also went all in and gave it the cover.

I’ve long been an advocate for mental illness awareness, and although I’m sure many jokes could be made here about my “crazy” behavior on this website over the years I’m being serious. It’s clear when browsing r/accounting that the “LOL depression” memes are often straddling so fine a line that you almost want to reach out to OP and ask with all seriousness, “you OK?”

It was just a year ago that we learned about a PwC manager in Kenya who took his own life by falling from the 17th floor of his firm’s office. A few years prior, we discussed the tragic case of a Deloitte partner who took his own life, likely driven directly by stresses at work. Of course, when it comes to suicide it’s often fruitless to try and understand the motivation behind it, although a natural reaction as it’s human nature to try and make sense of such acts.

Suicide is obviously an extreme example but what about public accountants’ overall mental well-being? To my knowledge, there’s no good study examining whether accountants are more or less disproportionately affected by mental illness than the general public. The JofA article tells us that in the United States per the National Institute of Mental Health (NIMH), in 2017 nearly 20% of adults lived with a mental illness, 7.1% of adults had at least one major depressive episode, and suicide was the 10th-leading cause of death. So, and I’m totally stealing an old joke from Greg Kyte here, that means either a fifth of accountants or nearly the entirety of one Big 4 firm likely live with mental illness (Greg did it better, obviously: “Although it’s statistically improbable, all of the accounting profession’s mental illness could be concentrated in a single Big 4 firm.)

The JofA article also confirms my suspicion that this issue is not researched, not for accountants anyway.

Discussions of mental health issues in the accounting profession are scant. A study published in Psychiatric Rehabilitation Journal by Albert Woodward, Rachel Lipari, and William Eaton found that financial-related professions ranked 19th out of 32 occupations in percentage of major depressive episodes from 2005 to 2014.

The article goes on to say that unlike their equally-stressed cohorts in accounting, lawyers seem to be better studied in this area.

Mental-health-related discussions are easier to find in the legal and academic professions, which (like accounting) involve long hours, stress, and pressure. For example, the ABA Journal featured an article in which lawyers shared their experiences with depression (Jeena Cho, “The Many Faces of Depression,” April 2019), and The Chronicle of Higher Education covered the suicide of economics professor Alan B. Krueger (Emma Pettit, “A Prominent Economist’s Death Prompts Talk of Mental Health in the Professoriate,” March 19, 2019). Articles like these express three messages. First, highly accomplished professionals are humans; no amount of intelligence or success can shield them from mental illness. Second, professionals need to talk more about mental health to remove the stigma and let others know that it is OK to seek help. Third, we need to watch out for one another and reach out if we think a colleague may be struggling.

So why doesn’t anyone talk about it? Other than memes, that is. I will come out and say that I was diagnosed in my teens but I’m also a writer so it’s easier to admit in my field thanks to Charles Bukowski making some flavor of dysfunction a requirement to be a writer. I’m not going to be shunned if I tell Bramwell I had one of those days I literally couldn’t lift myself off the couch, he’ll say sorry to hear and tell me to take care of myself. And for that I’m grateful, but I’d like to see the same treatment extended to what is no doubt a far more difficult profession than mine: yours.

Writes Mark J. Cowan, CPA, J.D., the brave soul who took a chance and told the entire profession about his struggle with depression in the Journal of Accountancy:

No matter where you work, there is a good chance that depression is right in front of you: in yourself, a colleague, a friend, or a client. Most of us don’t see it, and, if we do, we don’t talk about it.

This means partners, interns, clients, and I bet even a few chronically-bubbly recruiters live with or have battled depression.

I write about depression not as an expert on mental health, but as an accountant who lives with it. I have the low-grade, chronic kind known as persistent depressive disorder or dysthymia. But I have also experienced major depressive episodes when the symptoms are much harder to bear. I am, reluctantly, sharing my experience because I have not seen much discussion of mental health issues within the accounting profession.

We’re part of the problem. I searched the archive (reminder: we’ve been doing this for ten years) and our coverage of mental illness has been sparse at best. I was able to find this article from former contributor Leona May talking about her struggle with revealing her panic attacks at work and the lack of discussion around mental struggles at the office. She also brought up an excellent point about the connection between substance abuse and mental illness, and how firm culture often encourages this. It’s been a while so here’s a clip from that post.

My old firm’s culture was chock full of substance abusers, and according to NAMI, 40.7% of substance abusers suffer from some sort of mental illness, too. That firm worked its teams so hard that one of the managers passed around Ritalin so that associates and seniors could focus well into the early morning hours. When the team did have time off, they’d spend it at the bar. “Team bonding with a bottle of Hot Damn!” they called it. That April, the firm threw an end-of-busy-season-party with a firm-sponsored open bar. The day of the party, HR sent out an office-wide email saying, “Don’t drive home wasted; bill the cab fare to the office, and we’ll pay it. No questions asked.”

At first I thought, “Wow, they really care about me. They don’t want me driving drunk.”

Then I realized that my employer had A) worked its CPAs so hard that they needed an open bar to cope, B) provided copious amounts of free alcohol, and C) basically said “It’s totally okay if you’re too impaired to drive. Here’s some cab fare.”

The firm’s message: “Stressed out? Have a free drink… or eight… and a free cab. LOL.”

What the firm’s message SHOULD have been: “Stressed out? Here’s a day off of work and a list of mental illness warning signs and mental health professionals in our area covered under our insurance plan. Bill your co-pay to the office, and we’ll pay it. No questions asked.”

There’s also a 2012 piece by Greg Kyte in which he admits to going crazy his first busy season and being prescribed Klonopin. For those who don’t know, Klonopin isn’t a “wow you sound stressed at work, this might help” option, it’s an “alright then, let’s sedate the shit out of you” option. They don’t hand out Klonopin to people who are merely stressed out because it’s their first busy season. Or do they? I dunno, because no one is talking about how they too went crazy during their first busy season and had to be drugged just to get through it.

Progress has been made, I suppose, insofar as “progress” in public accounting is defined as any forward movement no matter how insignificant. A Journal of Accountancy cover story on depression and the lack of discussion around supporting mental illness in the profession is a good start. Now keep going. I don’t throw around praise easily but I commend the JofA and especially Mark Cowan for kickstarting this important conversation.

I recommend you read the article in its entirety as blockquoting Mark’s candor into little pieces doesn’t do it justice. But I’ll leave you with this tidbit that I think is especially important for CPAs to keep in mind.

The profession as a whole needs to talk more about mental health in general and depression in particular. Doing so would help remove the stigma and help CPAs who are suffering in silence know that they are not alone. The reality that CPAs get depressed and sometimes need help must become generally accepted.

At the individual level, we need to be looking out for one another. Although our professional skills won’t help us address our own depression, they can enable us to help others. CPAs pay attention to detail, exercise skepticism, and notice what others don’t. When it comes to the well-being of our colleagues, we all must become auditors. We must listen and watch to see the pain behind the smiles and encourage those who are struggling to get professional help.

The truth is there is no accounting for the darkness of depression. The professional toolkit that has helped us succeed in our careers will fail us. But if we seek help when we need it, and help others do the same, we can find a path to the light and ensure that each of us remains a healthy and thriving going concern.

I would love to see discussion in the comments but I understand if there’s some reluctance to put your business out there. If anyone would like to speak privately and share their struggles, our virtual door is always open and you can reach us using the contact methods listed below. Be good to yourselves out there, no matter what you’re going through.