It appears its massive, child-like compound isn’t enough as Facebook has announced plans to build a “company town” near its Menlo Park HQ:

The social network said this week it is working with a local developer to build a $120 million, 394-unit housing community within walking distance of its offices. Called Anton Menlo, the 630,000 square-foot rental property will include everything from a sports bar to a doggy day care.

This got us thinking, naturally, what if the accounting firms did the same? Can you even imagine?

We picture a sprawling, perfectly manicured courtyard with homogeneous, non-descript trees and perfectly similar units with mindblowingly drab taupe paint, wall-to-wall taupe carpeting and efficient layouts that minimize the distance from the couch to the bathroom to increase off-hours utilization. Really, kind of like a prison compound except with porcelain toilets instead of metal. 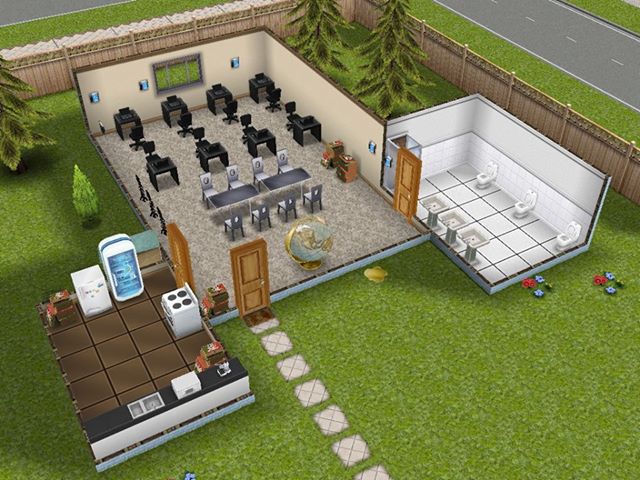 Artist’s rendering of a possible accounting firm housing unit (and by artist, I mean myself screwing around in Sims FreePlay)

The WSJ piece pretty much nails why something like this is a bad idea, be it Facebook or the Big 4 Mafia:

Spending more time in the clutches of the company sphere isn’t necessarily positive. One reason the old company towns eventually disappeared was that they could be overbearing to workers. In the 2013 version, the downside could be unspoken expectations that employees always be working.

I love the use of “clutches” in this context.

Anyhoo, let’s think about what an accounting firm housing community would look like. For starters, it would be extra convenient to stick a Jiffy Lube close by so interns can take care of important tasks like tire rotation. And there has to be a good source for chinos and dress shirts, something high quality like The Gap. And let’s not forget the importance of always-available WiFi so residents never have to worry about missing an important email while indulging at the sports bar or dropping Fido at doggy daycare!

[Updated on Sept. 23 with additional information.] EY management stuck to their narrative today that the recent layoffs at the firm aren’t layoffs but performance-based separations that were justified, even though many of those who have contacted us after losing their jobs said they weren’t on any type of performance improvement plan. First, before EY […]

Back in the spring, right around the time the country was going to hell in a handbasket due to the Rona, Deborah Gordon had been wooed by RSM US to leave her job as leader of KPMG’s Federal Excise Tax practice to lead the Excise Tax practice at Really Still McGladrey. About four months later, […]