Please ensure Javascript is enabled for purposes of website accessibility
Latest
The PCAOB Thinks It Deserves a 12.6% Raise Friendly Reminder: If You Are Going to Commit Fraud For Clients, Charge More Maybe 2023 Will Be the Year You Get That Big Promotion The Elliott Davis/Whitley Penn Merger Fell Apart in the Eleventh Hour, RIP Elliott Penn (UPDATE) EY Survey Ironically Finds the Four-Day Workweek is the New Standard at Many Companies

According to a tipster, KPMG distributed this the other day, because apparently sleeping with your coworkers is a serious problem over there.

According to a tipster, KPMG distributed this the other day, because apparently sleeping with your coworkers is a serious problem over there. 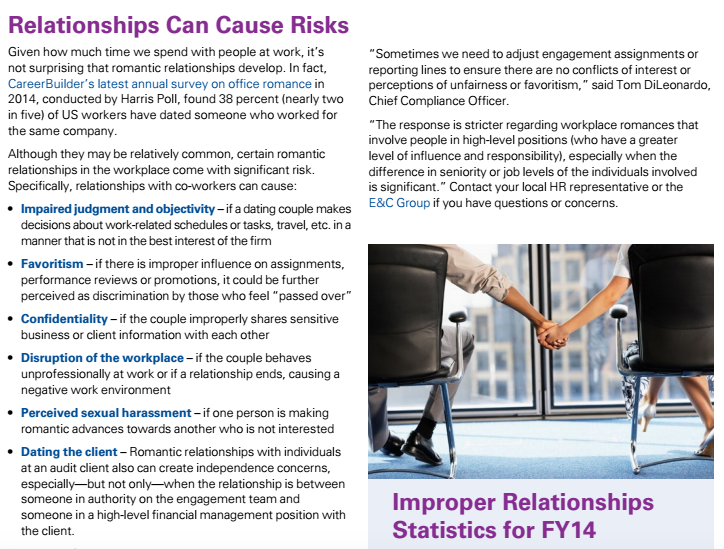 Wasn't EY the Big 4 firm with the audit partner screwing the client? Regardless, auditors need to avoid sleeping with clients because it might be an independence violation!

No matter how heated things get in the audit room, you have to avoid sleeping with your coworkers, too. We get it, you're captive in that windowless room with your colleague and it all starts to make sense the more you're locked up in that tiny space. Like Stockholm Syndrome, but in your pants. One minute you're testing internal controls, the next you've lost yours.

The entire thing is part of a bigger newsletter called "Integrity Matters," which someone at KPMG is patting themselves on the back for coming up with.

Welcome to the inaugural edition of the “Integrity Matters” newsletter. As the title’s double meaning suggests, this communication is designed to provide practical information about ethics and compliance topics (“matters”) and demonstrate the many ways our core value of “above all, we act with integrity” is important.

Getting entangled in a messy office romance is so not above all, acting with integrity, so it makes sense that whoever comes up with this stuff would choose to focus on that right out of the gate.

How often does this happen that they now feel compelled to remind everyone to resist the urge to hook up? For fiscal 2014, KPMG says it investigated 18 reports of "improper relationships," 7 of which were substantiated. Here's the breakdown:

In one case, the hooked up relationshipees were ratted out through the ethics hotline but attempted to deny their fiery passions:

An anonymous report was made through the E&C Hotline, that two professionals—in a direct reporting line—were involved in an inappropriate relationship. Specifically, the reporter alleged that the junior professional was receiving preferential treatment because of the relationship.

Firmwide Security conducted an investigation, which determined that the individuals were involved in a romantic relationship that had not been disclosed as required by firm policy. In addition, the individuals involved were not truthful in responding to the questions asked of them during the course of the investigation— first denying the relationship and later admitting it, but claiming that it had ended, when in fact it had not.

The findings were shared with the individuals’ functional leadership, who determined that the senior professional should be separated from the firm. The junior professional received a written reprimand and the performance review rating was negatively impacted.

It wasn't the actual banging that got them in trouble so much as it was the lying about the banging. You know, not disclosing the relationship and then refusing to be honest when asked about it by the firm. Surely there's some rule in the AICPA Code of Conduct that states you can sleep with other CPAs, you just have to admit it.

Here's the document for your reading pleasure. Don't worry, it's a far cry from 50 Shades.

Remember the Chrisleys? The flamboyantly wealthy TV couple Todd and Julie Chrisley of Chrisley Knows Best? On Monday, Todd was sentenced to 12 years in prison and Julie to seven years for an assortment of crimes like fraud, tax evasion, and conspiracy to defraud the United States. Also tied up in this bonanza of federal […]

KPMG Australia was in the news the other day for a new recruiting program involving high school grads (who were clearly rounded up from the burnout section behind the building joke) and it’s an interesting idea: on-the-job training in lieu of university. You’ll note these are technology recruits, we’re not desperate enough for accountants yet […]

The PCAOB Thinks It Deserves a 12.6% Raise

Friendly Reminder: If You Are Going to Commit Fraud For Clients, Charge More