We’ve finally reached the end of the six-pack of 2018 inspection reports released by the PCAOB on June 1. And we saved our favorite four-letter Big 4 firm for last.

Among the Big 4, KPMG’s inspection reports have been the most abysmal. Since 2010, Deloitte, PwC, and EY have not had an audit deficiency rate at 50% or higher. But KPMG has. Twice. In 2014 and 2017. It’s that horrible 2014 inspection report that supposedly kickstarted the plan by a handful of KPMG brainiacs to cheat the regulatory inspection process. And we all know how well that turned out.

Anyhoo, when the PCAOB released KPMG’s 2017 inspection report last year, we learned that the firm flunked half of the audits reviewed by inspectors, leading Adrienne to proclaim that the PCAOB should just put KPMG out of its misery. While the thought of that happening is kinda funny, the PCAOB let KPMG live and gave the firm’s auditors another chance to get their shit together.

So, how did KPMG do in its 2018 inspection report? 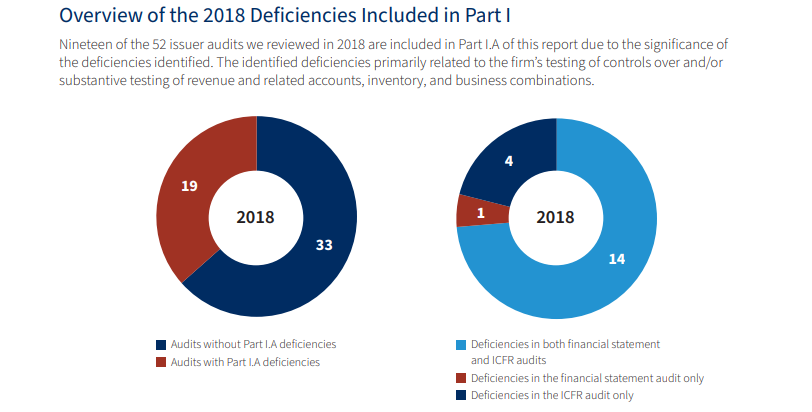 At least KPMG had more audits without deficiencies than with deficiencies. Progress! And its 37% deficiency rate in 2018 is actually KPMG’s lowest since 2012. Great job, Klynveldians! And while KPMG had the most audits among the Big 4 that went haywire, its error rate wasn’t the highest—that honor went to BDO USA, bless their hearts.

Here’s a historical look at KPMG audit deficiencies, courtesy of a March 2019 report by Compliance Week with updates by us:

You can read all about the problems KPMG had with its audits below, but we’ll give you the quick and dirty.

KPMG auditors had the most trouble with testing controls over the accuracy and completeness of data or reports (11 audits), testing the design or operating effectiveness of controls selected for testing (nine audits), identifying controls related to a significant account or relevant assertion (seven audits), and the overreliance on controls when performing substantive testing due to certain of these deficiencies (eight audits).

Plus, check out all the PCAOB rules and standards, including those pertaining to PCAOB’s precious Form AP, that KPMG decided not to follow:

The deficiencies below are presented in numerical order based on the PCAOB standard or rule with which the firm did not comply. We identified the following deficiencies: