Latest
Big 4 Lawsuits: Mauro Botta vs. PwC and VBS Mutual Bank Liquidators vs. KPMG Wirecard Drama of the Day: Hubert Barth Was Most Likely Forced Out as EY Germany CEO The Latest CPA Exam Scores Are Out, But Not Without a Brief Hiccup First Here Are Two Contenders For the Biggest Turd of a 2019 PCAOB Inspection Report Your Naughty Tax Preparer of the Day

Getting two public accounting firms that are among the top 100 largest in the U.S. in terms of revenue to tie the knot is harder than it used to be. But it actually happened twice in the latter half of 2020: CliftonLarsonAllen and Blumshapiro made a deal happen in late December and before that in August when Baker Tilly found a willing dance partner in Irvine, CA-based Squar Milner.

And it just happened again last week when Miami-based public accounting firm MBAF joined forces with BDO USA. Because No. 38 hooked up with No. 7, the MBAF/BDO deal could be touted as a “mega merger.” And it could potentially lead to BDO vaulting over Grant Thornton into sixth place in the public accounting firm revenue rankings.

But the “biggest deal of the century?” Really??? 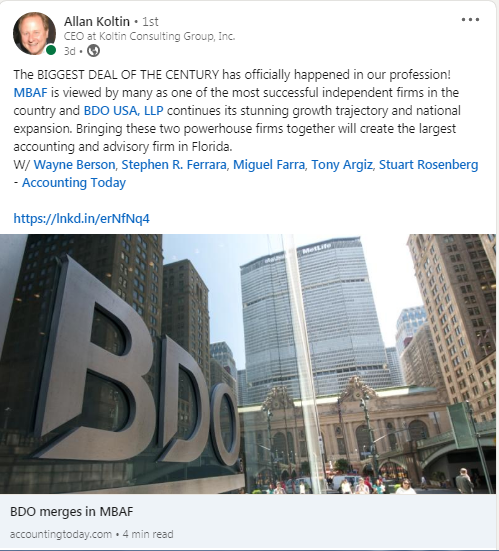 Oh well, that does it then. I guess no other deal this century will top that one. Not even a merger between Dixon Hughes Goodman and Moss Adams to form Hughes Dixon Moss.

PwC ‘Punished’ Thorough Auditing, Whistleblower Testifies [Law360] A couple Augusts ago, Adrienne wrote about an academic study that revealed the market for audit services penalizes audit firms for disclosing information critical of management in their audit opinions and that audit firms that find internal control material weaknesses experience lower client and fee growth. In other […]

Whether it’s in the sports world or the business world, whenever you see a press release or an article that says, “[PERSON’S NAME] is stepping down from [HIS/HER] role as [EXECUTIVE JOB TITLE] and will be taking another position with the [TEAM NAME/COMPANY NAME],” it’s because that person sucked at his/her job or something bad […]

Wirecard Drama of the Day: Hubert Barth Was Most Likely Forced Out as EY Germany CEO

The Latest CPA Exam Scores Are Out, But Not Without a Brief Hiccup First