Please ensure Javascript is enabled for purposes of website accessibility
Latest
Accountants Are the Referees of Business, Says Guy Who Would Know Turns Out Cohen & Company Auditors Are Human After All CliftonLarsonAllen Just Gained 200 People Advice on How to Get Hired at EY From the Vice Chair of Talent The Most-Fined Big 4 Firm in the UK is Raising Audit Fees, Knows Clients Will Complain About It

Oh Hamilton Nolan… you'd be wise to avoid writing about things you just don't understand. Case in point, this alleged hedge fund "P&L statement" he came up with that is less P&L and more some internal spreadsheet that likely got spit out by the fund's accounting software, if it's real at all:

Hedge funds are privately controlled and notoriously secretive investment firms with billions of dollars in assets. Here's a document listing all of the income, salaries, and spending for one hedge fund over several years.

This document, provided to us by a source, is an internal spreadsheet from a New York hedge fund called TPG-Axon Capital, showing its income and costs for the years 2005-2010. The firm is headed by Dinakar Singh, formerly a highly placed partner at Goldman Sachs. When shown the document, TPG-Axon spokesperson Mary Lee told us, "The document is not authentic, nor do the numbers make sense." Lee did not reply to a request for more specific details about what was incorrect or inaccurate about the document and its data.

OOOH, nice slipping Goldman Sachs in there, that automatically makes the data nefarious.

Hammy goes on to admit he might not have the financial wherewithall to analyze the "P&L" (which, in reality, is just some kind of budget apparently) and invites anyone who can tell a debit from a credit to work their magic. But he doesn't let his inability to read financial statements get in the way, as you'll see in a moment:

We provide this document simply as an illustration of the numbers behind the operation of a hedge fund, both before, during, and after the economic collapse of 2008. We encourage those of you with financial expertise to pore over this document and leave your observations in the discussion section below.

For a concrete demonstration of why the average American cannot understand our nation's tax laws, look no further than the discrepancy between what this firm paid in taxes, and what the partners walked away with each year. In 2007, for example, the firm's total taxes were $1.67 million, while the total "Distributions" to the firm's Original Partners came to $461.4 million. [Clearly, the firm's taxes don't include the income tax (or "carried interest" tax, which is far lower than a normal person's income tax rate) that would be paid on those distributions. Still, the gap between the revenue generated by the firm and the taxes it pays out as a line item seem jaw-dropping to the naked eye. We encourage any tax or finance professionals to weigh in on these numbers with a further explanation.]

This is the point in the article when all of you collectively smack your foreheads out of frustration. Even I know partnerships are a pass through entity and not directly taxed! DERPITY DERP DERP, my friend.

Sooooo… the breaking news here is hedge funds have a shit ton of money to blow on "office flowers" and airfare. Good to know.

Full doc is at the link, maybe you can help Hammy get this story right. 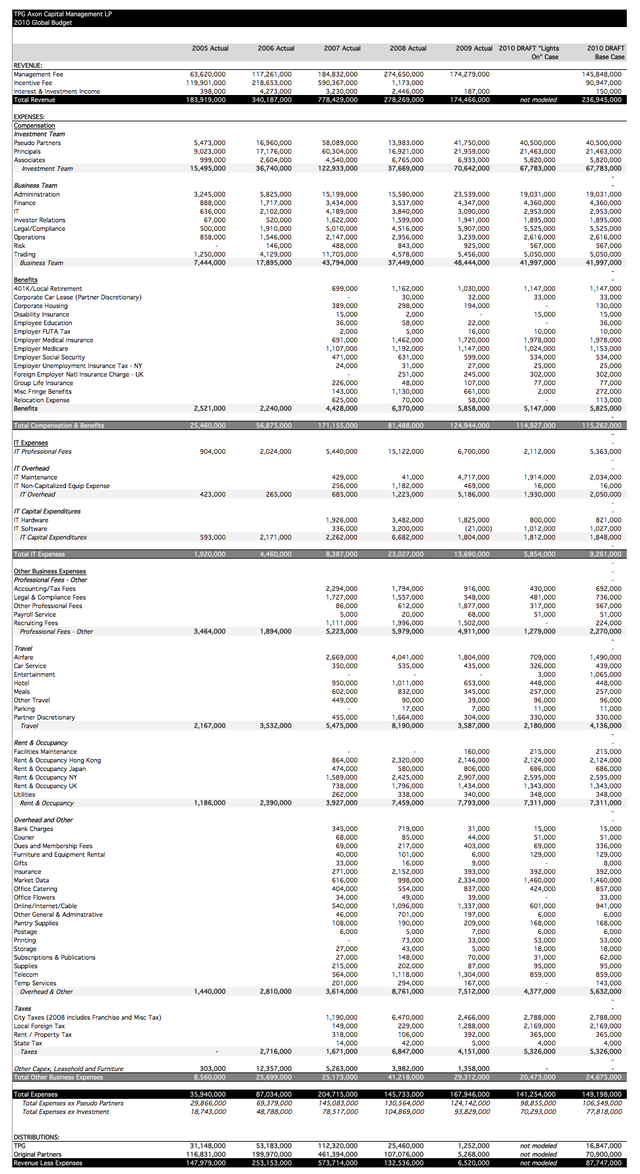 Ed. note: We received the below letter from an anonymous PCAOB employee who is trying to blow the whistle on what they perceive to be excessive waste and inefficiency at the audit regulator, the gory details of which are described thoroughly in the letter. It has not been edited and is published here on the […]

These days everyone wants a raise that is at least as high as the rate of inflation, which is currently 7.75%. The PCAOB does too. At an open meeting held today [Nov. 18], the Public Company Accounting Oversight Board approved its fiscal year 2023 budget and 2022-2026 strategic plan. […] The 2023 budget is guided by the […]