Latest
The IRS Is Paying an Unwelcome Visit to Alliantgroup (UPDATE) Alliantgroup Responds Are You Future-Ready? Learn How to Get There at This PICPA Event Friday Footnotes: Which Firm Puts in the Most Hours?; Clients Pay for the Talent War; Spotting Burnout | 5.20.22 Guy Blames Failing the CPA Exam on Why His Clients Got Busted for Bank Fraud and Tax Evasion Smug Smirking Douchebag Leaves Federal Prison Early

Monday morning we got an email that the PCAOB had dropped six 2018 inspection reports on us—the Big 4 firms, Grant Thornton, and BDO USA—so everyone’s favorite audit cops could show off their new snazzy inspection report format. This might have been the largest one-day release of reports of firms that are inspected annually by the PCAOB since the infamous Friday-before-Christmas report purge of 2012. 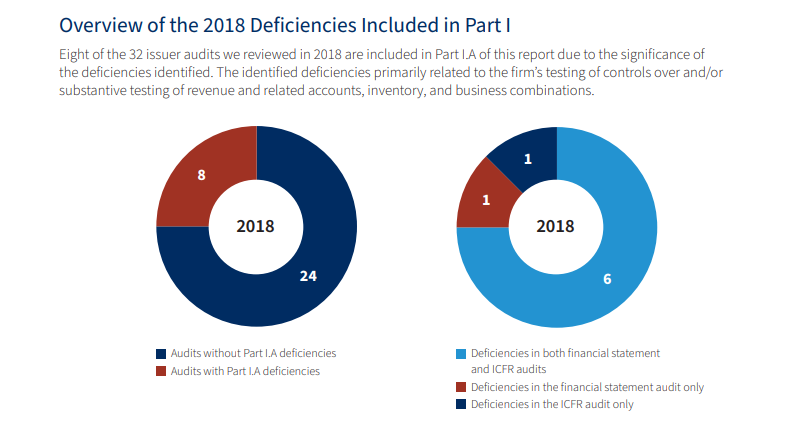 So, of the 32 issuer audits of Grant Thornton’s that were inspected by the PCAOB in 2017, 25% had significant errors. Great, Deloitte is now going to be like the surviving members of the 1972 Miami Dolphins (the only undefeated team in NFL history), who pop open bottles of champagne every time they know their perfect record will remain in tact.

OK, so GT didn’t break its single-year low deficiency rate of 18%, but you’ve got to give the Purple Rose of Chicago a little credit for the improvements the firm has made in audit quality. From 2011 to 2013, during the Reign of Chipman, GT had an average audit error rate of 55%, with a high of 65% in 2012—one of the worst of all time. That’s not just bad, that’s next-level bad.

But covering its last three inspection reports, GT has had an average deficiency rate of 22%.

Here’s a historical look at Grant Thornton audit deficiencies, courtesy of a March 2019 report by Compliance Week with updates by us:

According to the PCAOB, the most common Grant Thornton deficiencies in 2018 related to testing the design or operating effectiveness of controls selected for testing (five audits), identifying controls related to a significant account or relevant assertion (five audits), and evaluating significant assumptions or data that the issuer used in developing an estimate (four audits).

Here’s a little light reading for you guys tonight.

If these inspection reports were like tests taken in a classroom, Crowe and Moss Adams would have received passing grades, while Marcum would have failed big time. Let’s take a look: Crowe The latest audit inspection results for Crowe show the 11th-ranked public accounting firm by revenue bombed 27% of the audits reviewed in the […]