Welp, Grant Thornton’s 2019-20 audit quality inspection report from the Financial Reporting Council shows that GT hasn’t really gotten much better at audit quality in the past year. That’s kind of a problem when you’re the sixth-biggest accounting firm in the U.K.

Last year the FRC was pretty unhappy with Grant Thornton after the firm’s 2018-19 audit quality inspection report revealed that GT flunked half of the eight audits that were inspected. The U.K.’s audit cops said last year:

We assessed four out of eight audits as requiring more than limited improvements, compared with two of eight in 2017/18. We have assessed ten of the 39 audits that we have reviewed over the past five years as requiring significant improvements. This percentage (26%) is markedly higher than any other firm we have inspected over the period. This level of audit quality is unacceptable.

The quality of the audits inspected in the year, and indeed the overall lack of improvement in quality over the past five years, is a matter of deep concern. We have therefore required the firm to prepare and implement a detailed action plan to undertake an overhaul of its audit practice to improve quality.

So by the looks of it, the FRC reviewed nine Grant Thornton audits during the 2019-20 inspection cycle instead of eight the year before. Here’s how GT did:

We reviewed nine individual audits this year and assessed only five (55%) of them as requiring no more than limited improvements.

In response to the very poor audit quality identified in our 2019 report on the firm, GT initiated an audit quality plan which GT refer to as its Audit Investment Plan (“the plan” or “the AIP”) in Spring 2019. We therefore increased our scrutiny of the firm. Due to the timing of the plan, it had not yet had any significant impact on the quality of the audits we reviewed in this inspection cycle.

The firm has taken steps to address the key findings in our 2019 public report through the AIP, including focused training and standardising the firm’s audit work programs. We have identified improvements, for example, in the audit of going concern, a key finding last year. We also identified good practice in a number of areas of the audits we reviewed (including delaying signing the audit opinion until all evidence had been provided by the audited entity) and in the firm-wide procedures (including engaging external consultants in its root cause analysis process).

The overall inspection results remain unacceptable following poor inspection results last year. We continue to have recurring findings that contributed to this year’s inspection results. These include the effectiveness of the audit of revenue and appropriate levels of challenge and scepticism in areas of judgement. The firm needs to ensure that the specific actions taken to address the root causes of our findings also consider the actions needed to deal with the recurring nature of the issues.

A 45% failure rate instead of a 50% failure rate is still progress (albeit small), but for the fourth straight year, GT has had two or more inspected audits that needed “significant” improvements, as this graph shows: 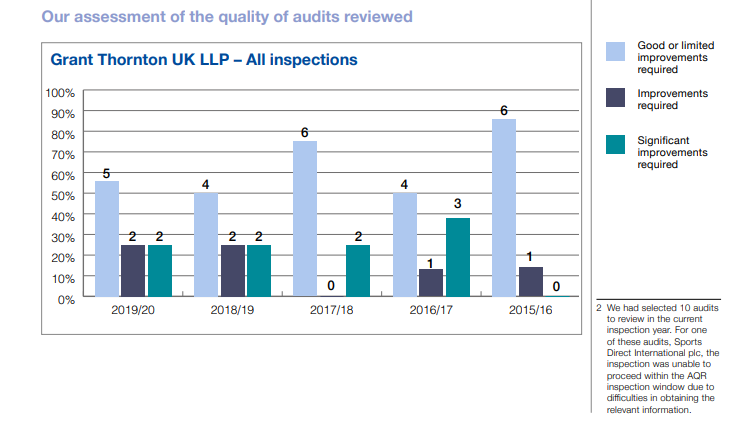 In GT’s response to the FRC’s findings for 2019-20, the firm closed its comments with this:

We recognise that audit quality is a journey rather than a destination and, whilst we have commenced the journey with vigour underpinned by a significant commitment across the firm to achieve consistently high quality in our audit work, our strategy is a multi-year strategy and, over the longer term, fully embedding new practices within the business in a sustainable manner is a key priority for us.

KPMG has been on a years-long journey from one end of the Earth to the other to find the elusive audit quality. Let’s hope GT finds it sooner rather than later.