A couple weeks ago the Financial Reporting Council in the U.K. released the results of its latest inspections of the Big 4 firms plus Grant Thornton, BDO, and Mazars, and it was the same ol’ story: audit quality is still really bad. How bad? Like one-third of the 88 audits reviewed during the 2019-20 inspection cycle being complete horsecrap bad. I’m sorry, “unacceptable” was the word the FRC used.

Some firms sucked more than others, but we’re going to start our review of the seven firms’ inspection reports with the one that sucked the least—Deloitte.

You might recall that Deloitte & Touche got to do a victory lap in early June after having the lowest audit deficiency rate (11.5%) among the six U.S. firms whose 2018 inspection reports were released by the PCAOB. That’s great and all, but Deloitte U.K. was the only firm to reach a target set by the FRC a few years ago, that at least 90% of FTSE 350 audits should be “good or requiring no more than limited improvements.” Deloitte did that in nine of 10 FTSE 350 audits reviewed by the U.K.’s audit cops.

In total, the FRC reviewed 17 Deloitte audits, and 76.4% needed little to no improvements. Of the remaining four audits, three required improvements and one was significantly bad.

Here are the areas where Deloitte auditors are still making screw-ups, according to the FRC:

But overall, Deloitte has had a pretty good run of having more high-quality audits than botched audits since 2015-16, as this graph from the FRC indicates: 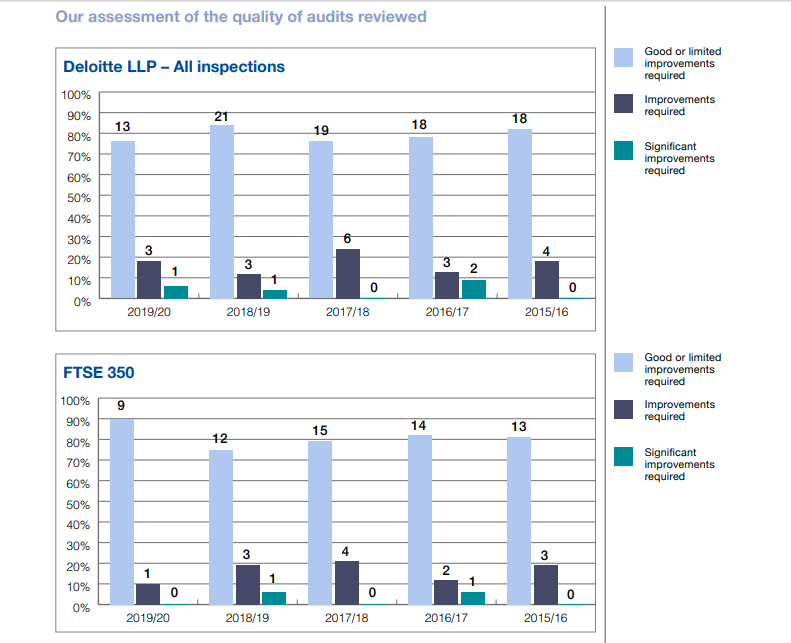 But it only goes downhill from here folks, as many of the other six U.K. firms inspected by the FRC can’t seem to get this audit quality thing figured out.