Tom Carter had been away from Deloitte for about two and a half years, so now that he’s back, I’m sure there were a few new people in his office or on his team that he was Deloitted to meet for the first time yesterday.

In today edition of “Big 4-on-Big 4 Poaching From Around the World,” we head Down Under where Carter rejoined Deloitte after having a cup of coffee at PwC in Australia. He recently announced on LinkedIn that he is a new tax partner at Deloitte Australia: 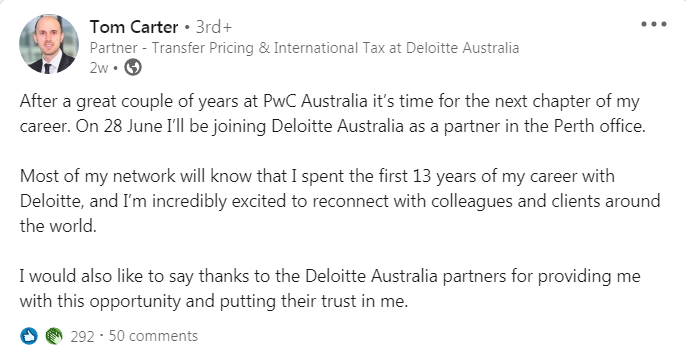 Carter got a big ol’ promotion to come back to D-town. He was not a partner during his short stint at PwC. According to his LinkedIn bio, Carter was a director of global taxes, energy, and resources in P. Dubs’ office in Perth from February 2019 until recently leaving the firm.

His LinkedIn profile shows he worked for Deloitte in the U.K. for nearly 13 years—making it to director of corporate tax, energy, and resources—before joining PwC in Australia.