[UPDATE] If this is the script Kelly Grier is giving her managing partners to tell their staffs about EY being the market leader in salaries among the Big 4, I unfortunately don’t see any type of mid-year salary adjustment coming for you guys and gals.

This was a tip we got last night on what Gerry Dixon, managing partner of EY’s Government and Public Sector practice, said during an all-hands call with his staff:

“Our competitors are now making adjustments to catch up to us.”

Of course Dixon and EY Americas FAAS leader Dana Bober (see below) can say that but neither was transparent enough to back up what they said with actual salary comparisons with the other Big 4 firms to prove that as fact.

Sorry, EYers, it’s not looking good. But at least you have that market-leading unlimited PTO you can fall back on until comp talks begin again this summer.

News started circulating on the usual chatter sites yesterday afternoon that EYers who work in financial accounting advisory services (FAAS) were told during an all-hands call that they would not be receiving a mid-year-ish bump in pay. That was confirmed in a little more detail by an EY employee today in a post on r/accounting: 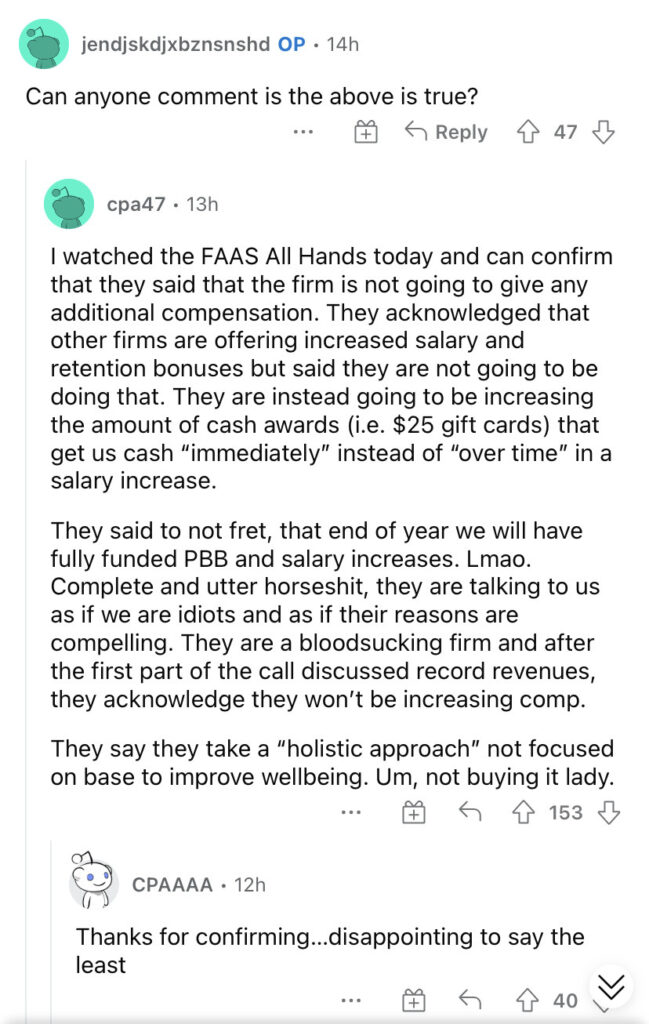 There was a lot of bitching from EYers in the comments of that post, and rightly so. One person said, “The rationale they mentioned is because the other firms are playing catch-up to our industry leading compensation packages. Delusional.”

EY is the only Big 4 firm in the last month or so that has yet to announce a firmwide salary adjustment for employees. Deloitte’s was actually an adjustment only for those whose salaries were considered below market, but Big D also dangled a one-time retention bonus of $20,000 and $35,000 in front of employees (amount of bonus varied by level) if they stay at Deloitte through the end of May 2023. And both PwC and KPMG already gave or are giving all of their employees at least a small bump in pay. These are definitely “panic raises” due to the hoards of people leaving the Big 4 for greener pastures. The Big 4 are hoping throwing a little more money toward already underpaid grunts who are being screwed hard into the ground will get them to stay. It might be too little, too late.

But from what I can tell from that post on Reddit, it was only the guys and gals in FAAS who heard that they aren’t getting mid-year raises, not everyone at EY. I checked in with three sources at EY today who don’t work in FAAS, and they said they haven’t been told what the folks in FAAS were told, although one EYer texted me, “My expectations [of getting a salary adjustment] are low.”

So I heard about the FAAS all hands yesterday. They did say no mid  year adjustments there. But also remember it’s only been 2-3 months since raises kicked in. People just see what the other firms are doing and different raise cycles.

However, as much of a follower as EY tends to be, I don’t see us following the other firms’ lead on this one.

More trying to tout the PBB [performance-based bonus] and asking us SMs and PPMDs to be generous there. Highlighting time off and the common lines of our raises were competitive already.

But nothing official outside of the FAAS all hand for now.

Many EYers were happy with the raises they received last summer during the usual compensation cycle, but I have a feeling if Kelly and The Gang don’t do something soon about salary adjustments, the caravan of people leaving EY is going to grow exponentially longer.

We’ll update you guys if we hear anything else about salary adjustments (or the lack thereof) at EY.

Compensation Watch ’21: Did EY Redeem Itself In the Eyes of Their Employees?