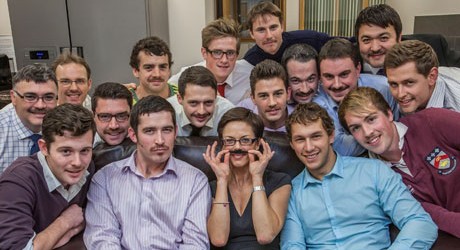 Ah, November. The one month out of the year when it is acceptable for professionals to sport creepy crumb catchers in the name of men's health, or something. We've already addressed the Movember movement so here is your feel-good 'stache story of the month.

KPMG audit assistant Dan Le Huray works on the Channel Islands, a cluster of islands in the English channel south of the UK and north of France. His uncle was diagnosed with prostate cancer last year, so he decided to man up and grow a lip tickler in November in support.

“I had seen others involved in the event, from colleagues to professional athletes but had never taken part before last year. I had initially intended for it to be a solo effort but decided that it would be a good chance to get to know some of my colleagues better and asked them to participate,” he said.

22 staff members participated, including advisory director Linda Johnson who has been rocking an obviously fake 'stache all month.

“I have been overwhelmed by the support from colleagues," said Le Huray. "We don’t know yet what the total sum raised will be as sponsorship pledges are still coming in, but the firm matches the amount raised so we are sure we can beat last year’s total of £1600. My uncle has since been given the all clear following a series of tests and treatments but many other men aren’t as fortunate and the money that is raised will go a long way to helping them."

Channel Islands Executive Director Tony Mancini – who is responsible for the firm’s corporate citizenship program and rocking his own Movember 'mo – said:

KPMG takes pride in supporting our staff when they take part in initiatives such as this. Dan has done an excellent job in rallying support and it is a pleasure to see our staff so readily engage with charitable causes. I have been surprised by the positive reactions that I have received for my “Mo-growing” efforts, which shows how this is a great way to make a difference while having a bit of fun.

Apparently KPMG offices in Canada are also getting their mo-grow on with such creative team names as GTA Movisory and MoStaches MoProblems. Collectively, they've raised nearly $200,000 in Canadian dollars, which is darn close to $200,000 USD.

I'm all for fundraising for a good cause but is it December yet? Some of these are just creepy.

On this, the best holiday of the summer, let us all try not to be angry and bitter like this guy who got mad at KPMG for flexing Omaha Steaks on Facebook many years ago: Speaking of steaks, did they ever come back after The Great Unsteakoning of 2020? Stay safe out there everyone and […]