Alternate title: If You Are an Accounting Student, Expect to End Up In Audit When You Graduate

Ever since early 2020 we have been forced to learn how to go without, not always an easy task in our always-connected, on-demand, two-day-delivery world. I don’t know about you but if I have to wait longer than two days to get something delivered, I start having some kind of existential crisis, furiously refreshing the USPS delivery screen in anticipation of the item being dropped on the greasy carpet of my apartment lobby. Then I get it — whatever it is — and I’m back to pining for some other new thing, starting the cycle anew. I should really discuss this with my therapist. Whatever. I was going somewhere with this … oh right.

For two years we — and by “we” I mean “capitalist Western society and specifically the United States” — have been begrudgingly tempering our anxious expectations when it comes to stuff. The car you want that you could have purchased with just a few clicks three years ago? Yeah, good luck. Need a new fridge because yours crapped out on you after only a couple years? Get in line, pal. Toilet paper, PS5s, appliance parts, even cream cheese have been in short supply the past few years (that last one was like a knife in my salty keto heart). This isn’t an economic blog so I won’t bother getting into the specifics that I’m sure you’re intimately aware of anyway, but the point is that supply of just about everything is messed up.

Supply shortages include CPAs but the accounting pipeline problem as it’s called didn’t happen because of or due to the pandemic. It’s been happening for years. I think the earliest I recall writing about it was 2013 or 2014 though admittedly I drank a lot both those years so my memory could be off and we called it a talent shortage back then. Here’s a 2015 AICPA article that sort of cosigns my foggy recollection:

The profession’s focus on the CPA pipeline has long been a priority. That will continue, with new approaches to attracting, engaging and inspiring the future generation of CPAs. We are constantly creating, implementing and evaluating programs to build the pipeline.

Over the past year, we have launched or refined many AICPA programs to align better with our goals. Our initiatives are focused on three themes:

Mind you this was following a record 40,350 accounting graduates hired by public accounting firms in 2012, and by 2014, the profession logged six consecutive years of record numbers of people majoring in accounting. At that point, a discrepancy grew between record graduates and comparatively stagnant CPA exam candidate numbers, an issue which remains unresolved to current day.

On top of the overall pipeline issue, we’ve heard grumblings of auditor shortages for years. Though at this point the grumblings are less like grumblings and more like your neighbor blasting EDM all hours of the day and night. Bloomberg Tax wrote about the issue earlier this year citing the Great Resignation and a turnover rate double what it usually is as risks to financial statements themselves. “In the rush to meet Securities and Exchange Commission filing deadlines, with more work piled on the shoulders of fewer people, important checks may be skipped, errors go unnoticed, and assumptions unchallenged,” wrote Amanda Iacone. The PCAOB is watching, too, concerned about the obvious audit quality problem that arises when your already overworked auditors are now doing the work of 10 people instead of a more modest three to four.

With all that in mind, I thought I’d pull some numbers from the two most recent AICPA Trends reports to compare 2019 to 2021 and see if new hire demand lines up with an auditor shortage.

Aaaand the same chart from 2021 [full report can be downloaded here]. New accounting graduate hires are increasingly being assigned to audit — a shift of 11.5 percentage points from 2018, per the report’s intro. 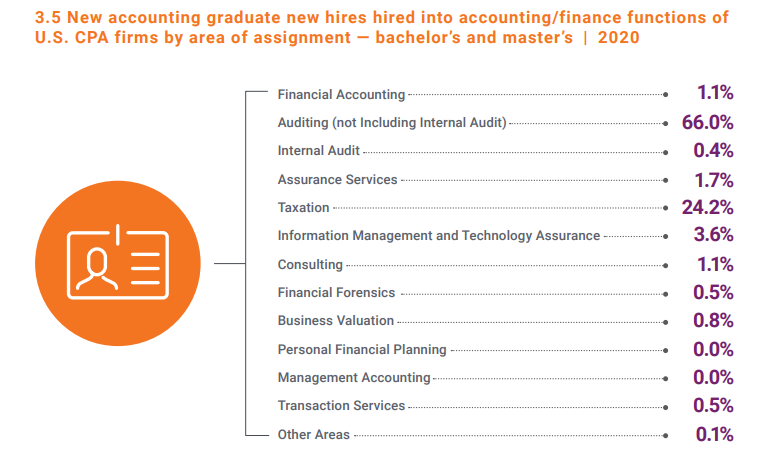 What can we extrapolate from this? Well the main thing is experienced auditors in this market shit gold nuggets and you guys have all the power, so go forth and leverage it. The second takeaway is that we should expect to see another big leap in non-accounting hires (42.7% of new hires in the 2021 report) as technology continues to replace functions previously performed by humans and likely the technology itself will take some leaps (bigger, stronger, more expensive!) as the shortage worsens and firms are increasingly strapped for talent. That thing we’ve always been talking about how robots are going to replace accountants? I bet right about now the firms are wishing they’d gone for it sooner.