AICPA President, CEO, and Benevolent Dictator Barry Melancon gave his yearly "state of the profession" address to CPA Letter Daily recently, but we won't bore you too hard with the specifics. We will, however, skim through this with a few interesting bulletpoints from the profession's fearless leader.

AICPA membership swelled to 400,000 this year. Melancon says "That was a big accomplishment and it’s a reflection of the interest in the profession, how well we carry out our mission, our service to entrepreneurs and our work in protecting the public interest in audits."

We should be proud of the legislative work accomplished this year. "Take the DATA Act, something we’ve been involved with for about five or six years. It begins with XBRL, something that was basically created by the profession."

Suckering Getting more people into the CGMA is one of the AICPA's top goals of 2015. "Today there are about 150,000 CGMAs worldwide, about 49,000 here in the United States. And in 2015, a number of new procedures will be in place – a new exam, new expectations, a new syllabus, new learning tools, a set of principles for management accounting – that are intended to help elevate the function of management accounting globally. It will be fun and exciting to see that effort mature to a different level."

Diversity in the profession is a vague but critical goal. "Diversity is critically important. I would ask you to think about it from a business perspective. The fact is we have not done a good job of bringing different ethnic groups into the profession. We could also talk about women in the profession, and there are some good stories there, and some work that needs to be done."

Now that we've got all that out of the way, let's talk about the CPA exam. Melancon says:

We have had about six consecutive years of record numbers of people majoring in accounting. That’s a great thing. For the last three years, however, we’ve basically had a level number of people taking the CPA exam. So there is a gap that’s building.

A major research project under way will help us to better understand that development. We want to find out what’s causing people to sit or not sit for the exam and then design tactics to deal with it strategically. The results will help us design and implement tactics to reverse the trend. That will involve the AICPA as well as state societies, firms themselves and management accounting functions or finance functions in business.

Check out this trend in not just accounting majors but graduates, straight from the latest AICPA Trends in Accounting report: 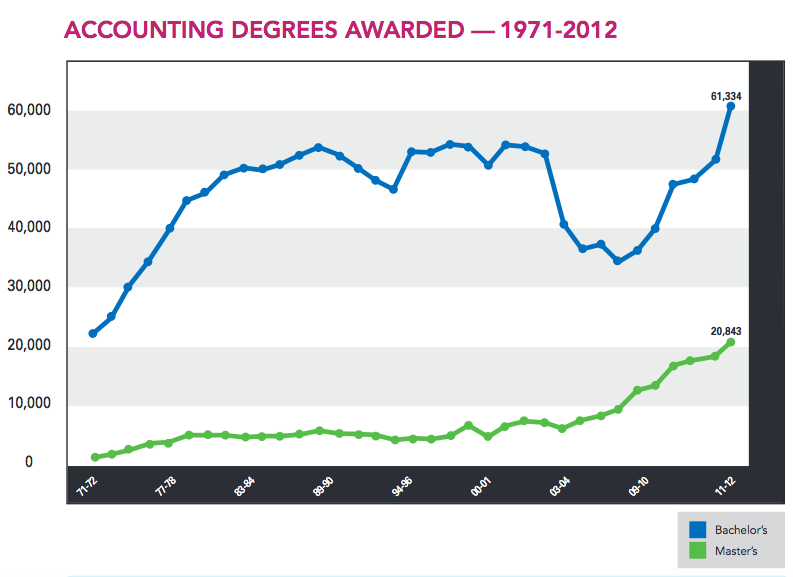 It was just a few years ago, via the CPA Exam Alert, that the examinations team was bragging about record numbers of CPA exam candidates:

In the final quarter of 2010, a record number of candidates sat for the Exam. In addition to the natural year-over-year growth we have been seeing since 2004, volume grew due to an influx of candidates hurrying to take the Exam before the new content guidelines take effect in January 2011. Overall, we experienced 16% year-over-year growth, which means that in all of 2010, over 300,000 sections of the Exam were scheduled, an all-time annual record.

So what happened? Shall we speculate wildly before the AICPA reveals the results of its research on the matter?

It has now been more than a decade since the AICPA observed — and worried about — a growing gap in the number of accounting graduates and the number of those graduates who pursue the CPA exam. In the time since, that gap has only widened and much effort has been expended to figure out […]

There’s a fun little conversation happening on r/accounting right now (it was yesterday actually but I have the rona and time is a meaningless measure when one is contending with brain fog of this level) and we’d be remiss if we didn’t recap it for you. First, the original post: I didn’t realize Barry Melancon […]