The AICPA released its much anticipated 2017 Trends In the Supply of Accounting Graduates and the Demand for Public Accounting Recruits (“AICPA Trends” or “TSAGDPAR” for those of you who can’t resist an acronym) report today, and it shows two major developments: 1) A dropoff in enrollment for master’s in accounting programs; 2) Slower hiring of new graduates by CPA firms.

TSAGDPAR aka AICPA Trends is a big report with lots of details, so we’ll dispense with a comprehensive post and revisit it a few times as we look things over. Of course, if you see anything interesting you want us to cover, let us know by emailing [email protected].

For now, we’ll focus on two tables from the summary. The first shows enrollment by program type: 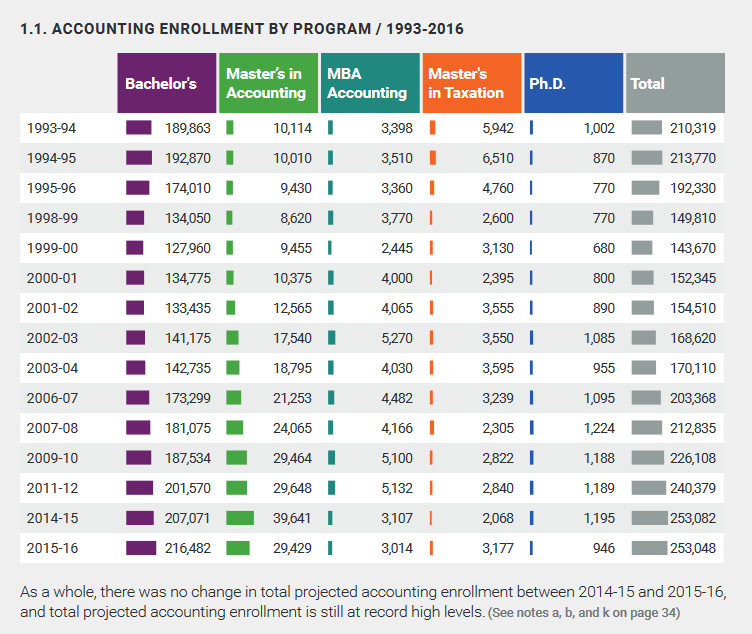 The first thing that jumps out is the drop in enrollment in Master’s in Accounting programs. Ten thousand fewer enrollments is a 25% percent reduction, marking the lowest point in the statistic since 2007-2008. The enrollment in bachelor’s programs increased 4.5 percent, but overall enrollment in 2015-2016 is flat compared with 2014-2015, following more than a decade of students plowing into bachelor’s and master’s programs.

What’s interesting is the report also states that “The number of new CPA Examination candidates increased 13% between 2015 and 2016.”

The trend of more students in bachelor’s programs, but fewer in master’s programs, yet more CPA exam candidates might suggest that the WAY TO THE CPA™ — which requires 150 credit hours — doesn’t necessarily have to go through a graduate program.

So, what else we got? How about some hiring: 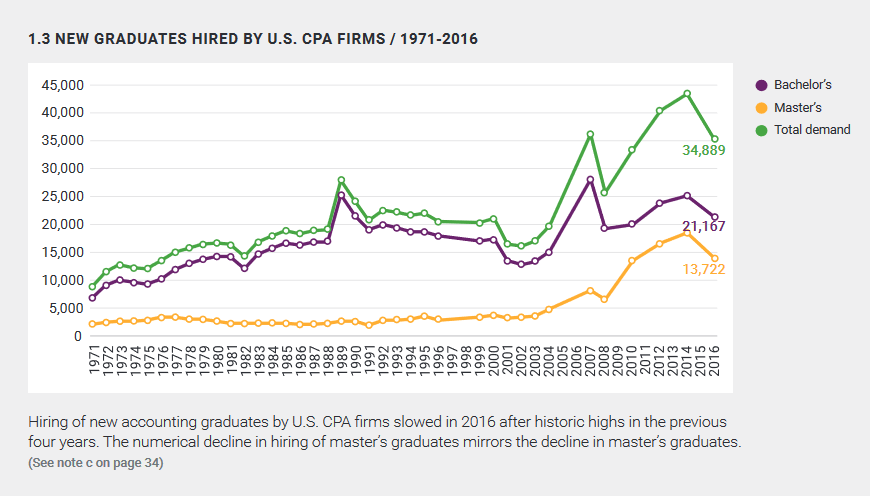 Historically, the total number of hires is still very high. But the drop that occurred in 2016 from 2014 of nearly 20 percent is significant. And, contrary to the trend in enrollment, CPA firms hired fewer bachelor degree recipients, 15 percent fewer.

I have no idea if these trends are indicating a shift coming to the labor market for CPAs. And I suck at making predictions, so I’ll refrain to prognosticate on where this will lead, but the CPA party had to end sometime and, while the music is still playing, there are definitely fewer people dancing.

Prior coverage of AICPA Trends report: