While there were plenty of accountants who behaved badly in 2021, the accounting profession as a whole was fairly well-behaved and competent last year, according to a new report from Cornerstone Research. Good job, everyone.

From the report, Accounting Class Action Filings and Settlements – 2021 Review and Analysis:

In addition, the total value of all accounting case settlements fell to the lowest level over the last decade, reflecting both a drop in the number of settlements as well as a decline in settlement size.

Filings referencing financial statement restatements and/or allegations of internal control weaknesses declined to the lowest level in more than 10 years, according to Cornerstone Research. However, accounting case filings involving allegations of improper revenue recognition continue to surge: 41% of all accounting-related class-action filings in 2021, up from 37% in 2020 and 19% in 2019.

During 2019 and 2020, only a handful of federal securities class actions involving SPACs were filed, but in 2021, federal filings involving SPACs became the dominant filing trend. Consistent with that overall trend, SPAC filings that include accounting allegations tripled in 2021 as compared to the prior year.

There are several trends in SPAC cases involving accounting issues that we have observed over the past three years:

Speaking of settlements, there were 33 that involved accounting allegations in 2021, down from 38 settlements in the previous year, according to the report. The percentage of accounting case settlements fell to 38% of all securities class actions settled in 2021, compared to 49% in 2020. 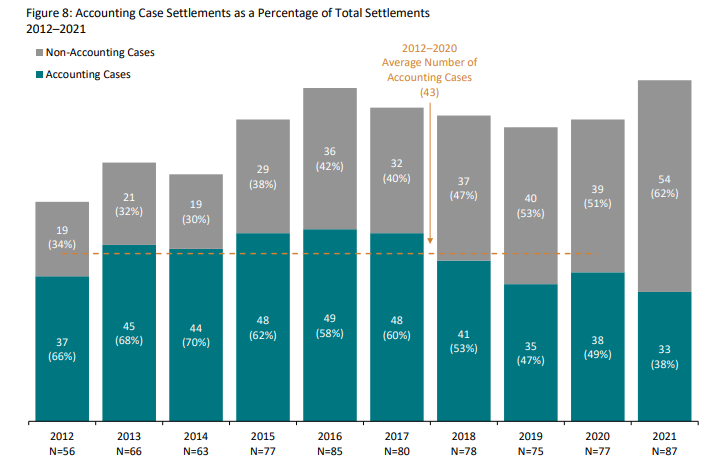 For defendant companies named in accounting case filings, the Disclosure Dollar Loss Index, a measure of market capitalization losses, fell from $70.9 million to $29.4 million, its lowest level since 2017, according to Cornerstone Research.