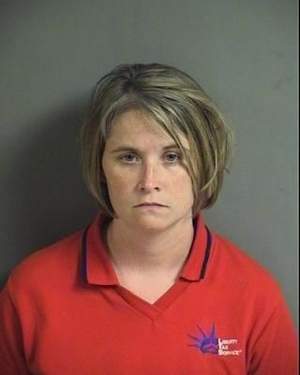 Yeah, we all have our tax season stories.  Like remember the day in April when you got arrested on charges of stealing from your business partner while your husband got arrested for making a drunken spectacle of himself at the local elementary school?

You don’t?  Then your story can’t top this one out of the Iowa City suburb of North Liberty:

The co-owner of a local tax service has been accused of using more than $22,000 from the business’s savings account to cover her credit card bills and her husband was arrested for allegedly causing a drunken disturbance at a local elementary school.
According to an Iowa City police criminal complaint, an investigator met with a co-owner of C & M Tax Service. The other co-owner is 31-year-old Melissa M. Frost of North Liberty.

Leading to the arrest of Ms. Frost on allegations that she manipulated the tax service books and locked her co-owner out of the financial software while helping herself to $22,000 to cover credit card debts.  If that wasn’t enough to ruin her tax season:

Police said Frost’s husband, 33-year-old Cory A. Frost was also arrested on Friday. Cory Frost went to North Bend Elementary in North Liberty at 2:45 p.m. to confront an employee there concerning a “situation with his wife,” according to North Liberty police Lt. Diane Venega. It is unclear if that situation is related to Melissa Frost’s arrest.
[…]
When police found Frost, he smelled of alcohol and appeared to be intoxicated. Police said Frost had a blood-alcohol content of .204 percent. He was previously convicted of public intoxication.

If you’ve been around the business awhile, you know how hard tax season can be on a marriage.  This one seems to have been under at least average stress.