Audit Analytics has released its analysis of a very lucrative fourth quarter of 2020 for initial public offerings in the U.S.

Including blank check companies, also called special-purpose acquisition companies, there were 210 IPOs between Oct. 1 and Dec. 31, 2020, which raised more than $65 billion. Compared to the third quarter, total proceeds in Q4 were up by more than $3.5 billion, and compared to Q4 of 2019, total proceeds rose by a whopping $56 billion.

Of the 210 IPOs in Q4, 132 (or 62.9%) involved blank check companies. As Audit Analytics points out, a blank check company “has no established business plan or operations and can serve as a vessel to engage in a merger or acquisition with an unidentified company, entity, or other person.”

Startups can combine with a blank check company or SPAC to go public as an alternative to a traditional IPO.

The IPO that generated the most total proceeds in Q4 was Airbnb ($3.5 billion), which was audited by PwC, according to Audit Analytics. But PwC wasn’t the busiest audit firm in Q4. Neither was Deloitte, EY, or KPMG.

Here’s a chart from Audit Analytics that breaks down Q4 IPO audit client count and proceeds: 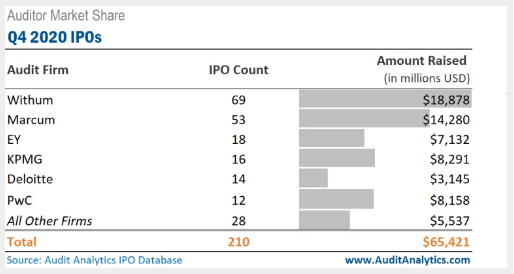 But if you take out those pesky SPAC IPOs, Withum and Marcum go away and the Big 4 firms rise to the top, as this other chart from Audit Analytics shows: