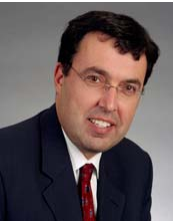 It was a very quick turn around from the time we learned that the most interesting accounting firm CEO was retiring, to learning the slate of candidates to the announcement of the successor but here we are. Wayne Berson, BDO's Atlantic Assurance leader will be the new CEO effective November 1.

“I am honored and grateful to have my fellow partners choose me to lead BDO at this time,” said Wayne Berson, CEO-elect of BDO USA. “The accounting profession is experiencing a period of unprecedented change from both a regulatory and competitive standpoint, and I believe BDO is uniquely positioned to grow and prosper in this new environment.”

Berson, 50, is a spring chicken compared to Captain Jack, who is 72, which is probably a pleasing fact to many of the partners at BDO, a firm that had been dogged by rumors about behind the curve in the accounting business.
We were sent the internal memo that announced Gerson's election and it has quite a few more details than the BDO press release.

Known for his steady demeanor in high-pressure situations and his collaborative, consensus-building style, Berson says he intends to draw from talent in all areas of the firm in fulfilling his vision for BDO. “We have one of the most talented groups of partners and professionals I’ve seen and I intend to draw from our vast expertise and brainpower to help move the firm toward our ultimate goals,” he says.
Berson began his BDO career in 2001 as Assurance office business line leader (OBLL) for the Greater Washington, D.C. office, after spending 10 years with a D.C.-based local firm – the Lang Group –  which, under his leadership as managing partner, merged with BDO. From his OBLL position, Berson was promoted to Atlantic Assurance RBLL in 2008 and was then elected to the BDO board of directors in 2009. In 2010, he became the presiding member of the board. Prior to his time with the Lang Group, he spent four years with Grant Thornton in Washington, D.C., and another four years at a CPA firm in South Africa. He has been in the profession 28 years.
Berson was involved in the launch of the firm’s first national advertising campaign, has been a champion of the Women’s Initiative since its inception and is national director of the BDO Institute for Nonprofit Excellence. He also is a board member and the audit committee chair of the Global Alliance for Vaccinations and Immunizations (GAVI) Fund, a multinational multibillion dollar not-for-profit humanitarian organization founded and primarily funded by Microsoft chairman Bill Gates, and is past president of the Greater Washington Society of CPAs.

Not exactly a lightweight. Any Captain Jack deckhands (or anyone else for that matter) that want to opine on their new skipper may now do so.

Wesley Freeman with his wife, Alicia. The Atlanta Journal-Constitution reported today that a GoFundMe campaign has been started for the family of Wesley Freeman, the BDO Atlanta managing director who was shot and killed by his former BDO colleague Raissa Kengne on Aug. 22. Here is a Facebook post from Beth Lee Garner, national practice leader […]

[Update at bottom of post with charges filed against Raissa Kengne; internal email from BDO about the shooting.] A woman who was arrested earlier today after allegedly shooting three people, killing two of them, in Midtown Atlanta is reportedly a former audit manager at BDO USA. As of 11:40 p.m. ET, police have yet to […]