In the competitive world of Big 4 recruiting, sometimes reputation is everything. Oh who are we kidding, the firms are all mostly the same — from work-life balance, pay, and even prestige — regardless of what PwC recruiters may tell you. At the end of the day, Big 4 firms are in a constant race to the middle amongst themselves to recruit top talent without sticking their necks out too far. Jeans Fridays? Sure. Radical vacation policies that staff are actually allowed to utilize? You must be trippin’.

So when one firm which already has the reputation of being the red-headed stepchild of the profession finds itself embroiled in yet another scandal, you have to wonder how its employees feel. Are they shocked? Embarrassed? Nonplussed by the whole thing?

Thankfully, Fishbowl asked its userbase this very question. Y’all should know what Fishbowl is by now, but if you don’t, basically the accounting board is what the Going Concern comment section was circa 2010-14 minus the fascist dictator mod (hey, what’s up?) and cat pictures.

In a June 13 survey, Fishbowl asked users one simple question: How does the $50 million SEC settlement scandal affect your perception of the firm?

The results are … surprising? Surprising in the sense that many had no opinion whatsoever. I know if our overlords at Accountingfly were in the news for cheating, I’d be pretty shocked and humiliated, so it speaks quite a bit to KPMG employees’ indifference that it was just another day for many of them. 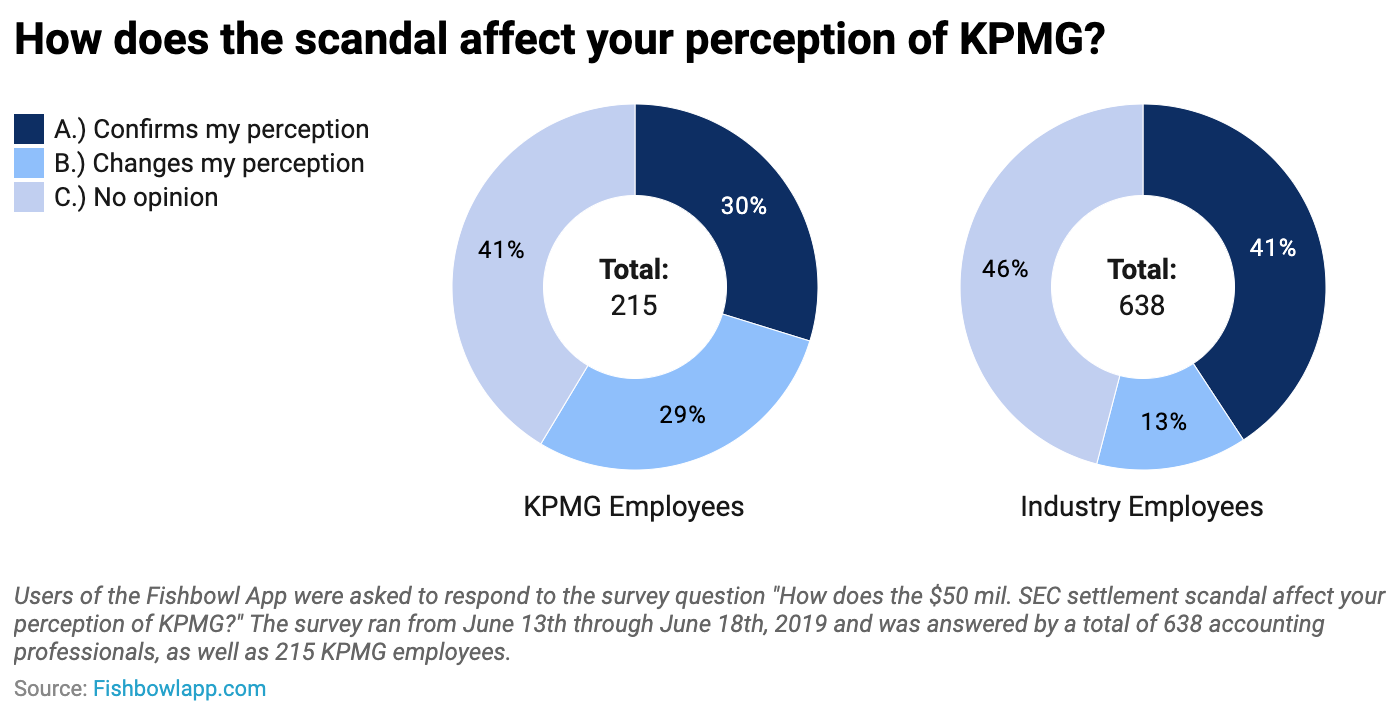 In case your chart-reading skills are rusty, here are the results:

Looking at some of the chatter surrounding the survey, it’s clear that some folks in the “no opinion” camp didn’t think it was that big of a deal. After all, it’s old news. Thing is, $50 million isn’t just some light slap on the wrist for a momentary lapse in judgment. And a reasonable person might argue the behavior and subsequent fallout is in fact a symptom of a wider culture of corner-cutting and cheating that we’re now coming to expect from KPMG, what with that whole PCAOB scandal not too long ago.

Here’s the other glaring issue: their entire business model, hell the entire profession, is based on trust. Clients have no fucking clue what it is you do for them or why it costs them so much money, but thanks to decades of difficult PR work by the AICPA and hopefully many years of keeping clients’ chestnuts out of the regulatory fire, KPMG clients have come to trust the firm to be halfway decent at their jobs and trustworthy. After all, you don’t hand millions of dollars a year to a bunch of shady dudes to do work you don’t understand. It would be like hiring a bunch of drunk Mexicans from the Home Depot parking lot to do a massive home renovation, giving them a sack of hundred-dollar bills upfront, and being surprised when they bail halfway through the first day, leaving you with a half-painted wall and a 2×4 nailed to the dirt where your fancy new deck was supposed to be.

Add to this, the issue doesn’t just affect KPMG and its employees. The profession as a whole gets dinged by bad behavior. Again, this is an industry based on trust and trustworthiness, two things you can’t get back once the public’s faith has been eroded beyond a certain point.

Not to mention how hard it gets for recruiters to snag that “top talent” they’re always crowing on about needing when rumor is on the street your firm is shady.

Said one senior on Fishbowl: “Joined the firm over a year ago (advisory). Never heard about
this. This makes me regret my decision.”

Looks like KPMG will need to up that Men’s Wearhouse gift card balance next year if they want to stay in the running for America’s best and brightest CPAs. Or, you know, just stop doing shady shit and getting caught.

Sky News has obtained part of an internal memo KPMG Global Chairman and CEO Bill Thomas sent to firm partners earlier this month in which Mr. Thomas turns his nose up at EY’s plan to split consulting and audit practices. Some choice quotes from the memo: We are a partnership that has been strong and […]

14 or 15 years ago I trolled Bill Sheridan of the Maryland Association of CPAs on Twitter about uncovering a weapons cache they’d stashed on CPA Island, a then-revolutionary virtual space in the game Second Life MACPA had set up for…accounting things. Back in 2008 CPA Island was the first (only? It never really caught […]