Halloween is one of those holidays that auditors don't often get to celebrate at work. The general consensus being that you can't provide exemplary client service while dressed as Captain Jack Sparrow, a contestant on The Price is Right, or Sexy Heinz Ketchup. This is even more unfair due to the fact that the entire tax department at any accounting firm can show up in loincloths, chase each other around the office while wolfing down bite-sized Snickers and nobody gives a rat crap. It's practically encouraged. To auditors, this is an abomination.

Late yesterday we were sent alleged evidence that at least one person has decided to buck this trend. From our tipster:

Since you guys are my favorite website, I'd like to share a hilarious picture going around my friends emails – Scooby just reviewin'. KPMG was cool enough to let their employees dress up.

Here's the evidence we received: 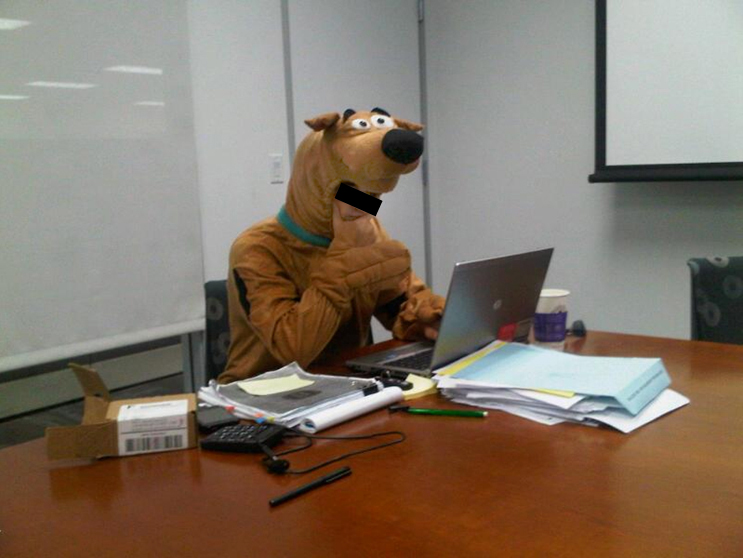 Okay, the only thing that's indisputable here is that a grown man is sitting in front of a laptop wearing a Scooby Doo costume.

What cannot be confirmed at this time is 1) This man is an auditor and 2) This man works for KPMG. However, there is a lot of circumstantial evidence that does support our tipster's contention that this person is an auditor.

1. The laptop is clearly some PC jalopy that a public accounting firm would issue to an auditor.

2. The enormous USB capable 10-key calculator is something an auditor would schlep around.

3. Crude, soulless conference room is one where clients would obviously stick an auditor.

4. The black pen at the bottom of the screen is standard issue for Big 4 firms.

5. The little colored flags on papers to Scoob's right are a favorite of many auditors.

Now, to the assertion that this is a KPMG employee and that the HoK allowed costumes yesterday – well there's nothing that I can see that definitively places Scoob in the KPMG Kamp, nor have we been presented with anything that would lead us to believe that a costume policy was in place. Accordingly, we'll refrain from reporting this as fact until we receive additional sources.

This story remains fluid, so if you have information in regard to either the Scoob in question or which firm allowed auditors to celebrate so festively, get in touch.

KPMG Australia was in the news the other day for a new recruiting program involving high school grads (who were clearly rounded up from the burnout section behind the building joke) and it’s an interesting idea: on-the-job training in lieu of university. You’ll note these are technology recruits, we’re not desperate enough for accountants yet […]

[Updated original post from Oct. 19 with KPMG raise percentages for 2015 and 2013.] As the leaves start changing to PwC colors, it signals the start of compensation season at another Big 4 firm: KPMG. The results of the most recent round of comp talks are in and can be found on r/accounting, per usual. […]