Latest
It’s Official, the Only Way to Get a Decent Raise is by Leaving Your Firm Former and Current Alliantgroup Employees Speak Out About ‘Evil, Toxic, Emotionally Damaging Company’ Which Big 4 Firm Had the Most Elijah Watt Sells Award Winners in 2021? The IRS Is Paying an Unwelcome Visit to Alliantgroup (UPDATE) Alliantgroup Responds; Employees Returned to Work on Tuesday Are You Future-Ready? Learn How to Get There at This PICPA Event

The article we're talking about today is entitled "PwC report predicts death of nine-to-five" but that's not exactly what PwC predicted:

The traditional nine-to-five office environment could soon become a thing of the past according to a new report by PwC: ‘The future of work: A journey to 2022’.

The research reveals that only 14% of UK workers want to work in a traditional office environment in the future.

Whereas one in five people say they want to work in a ‘virtual’ place where they can log on from any location or use collaborative work spaces.

Yeah? Well I want a pony and a million dollars, that doesn't mean I'll get either by the time I turn 42.

The report divided work of the future into three separate worlds; orange, blue, and green. 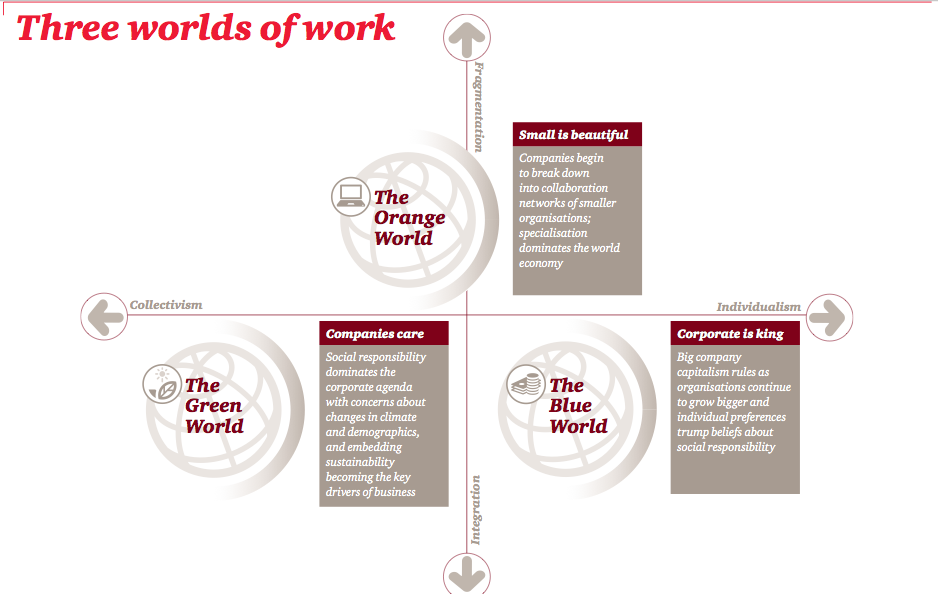 What does this mean? Hell if we know. But the "Blue World" sounds awfully familiar:

In the Blue World, big company capitalism reigns supreme. Consumer preferences and profit margins dominate in a model built around flexibility, efficiency and speed to market. The relentless pressure on performance isn’t just driven by competition from peers, but also aggressive new entrants looking to lead innovation and undercut existing players. Blue firms follow the money and go wherever the opportunity is – their operating model enables them to survive and thrive in both stable and volatile economic conditions alike.

We're guessing the Blue World still expects your butt in a chair for at least 8 hours a day, but they are probably very good at dangling the carrot of flexibility in front of your face. Hopefully by then we have clones to do our work for us while we lay around on the couch and eat futuristic Frosted Flakes.

The Green World is exactly what it sounds like, fulfilling the desires of mythical Millennials who appear in stories by old codgers who value social responsibility over paying their bills. And the Orange World smashes the current corporate structure, fragmenting workers into individual, empowered units. Again, we have no idea what the hell this is supposed to mean but, you know, it's the future and stuff.

Back to the death of the nine-to-five article:

Rupert Hutton, human resource services director, PwC, said: "It's clear from our research that traditional nine-to-five office working could soon become resigned to history for many workers. People feel strongly that they no longer want to work within the constraints of the typical office environment and advances in technology mean that workers no longer have to be shackled to their desks.

"We predict that many organisations will embrace these changes in employee working preferences and use them to their own advantage.

"We could easily see the rise of organisations that have a core team that embodies the philosophy and values of the company, but the rest of the workforce is not fixed and come in and out on a project-by-project basis.

"These companies will make extensive use of technology to run their businesses, coordinate a largely external workforce and support their relationships with third parties.

"The growth of this vibrant, innovative and entrepreneurial middle market could soon start to challenge big businesses as they can compete on specialism and price due to their slimmed down business model."

Yeah, OK. You first, PwC. I'm pretty sure factory workers of generations past didn't enjoy being shackled to their assembly lines and look what happened to them? If — big if — this is the future, we all know the accounting profession is last to get on board with anything so don't expect change any time soon. Maybe by the time you retire. Ain't the future grand?

It’s Official, the Only Way to Get a Decent Raise is by Leaving Your Firm