Let’s keep plowing through this pile of 2018 PCAOB inspection reports and take a look at how PwC auditors did during the 2017 inspection season.

PwC auditors haven’t had a lot of great press lately: we had the Mattel accounting cover-up; Brandon Sprankle spectacularly violating independence rules, resulting in PwC being fined $7.9 million by the SEC and Sprankle suspended and fined $25,000; and a lawsuit filed by former PwCer Mauro Botta who alleges that he was fired in retaliation for standing up to and exposing auditor misconduct at PwC and for reporting that misconduct to the SEC.

But PwC and its auditors have fared pretty well of late in terms of PCAOB inspection report performance. In its 2017 inspection report released last year, PwC messed up on 13 of the 55 audits reviewed during the 2016 inspection cycle, for a rather mundane deficiency rate of 24%. It turns out that 2018’s inspection report is pretty much a carbon copy of 2017’s. 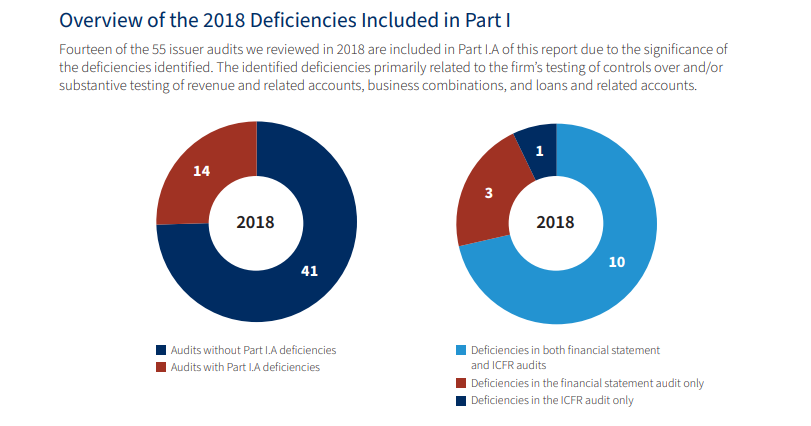 So PwC followed up an audit deficiency rate of 24% with a 25% error rate. Not Deloitte good but still pretty good.

Since 2010, PwC hasn’t had an error rate over 41% (which would be a really good deficiency rate for KPMG), but remember when the PCAOB mentioned in its expanded 2008 inspection report that P. Dubs auditors loved CAKE a little too much back in the day? That was fun.

Here’s a historical look at PwC audit deficiencies, courtesy of a March 2019 report by Compliance Week with updates by us:

According to the PCAOB, the most common PwC deficiencies in 2018 related to testing the design or operating effectiveness of controls selected for testing (eight audits), evaluating significant assumptions or data that the issuer used in developing an estimate (seven audits), and identifying controls related to a significant account or relevant assertion (five audits).

In addition, they made the most significant auditing gaffes for clients that have revenues in the range of greater than $1 billion to $2.5 billion (four audits with deficiencies out of 15).

You can read all about it right here: