For now, let’s look at the Republicans (trust me, I plan to get to the Democrats, too). When Republicans talk about tax reform, they say they mean that they want to close loopholes to increase revenue and make the system better. OK, first of all, they are not loopholes, not if you adhere to the dictionary definition that a loophole is "a means or opportunity of evading a rule, law, etc."

revenue losses attributable to provisions of the Federal tax laws which allow a special exclusion, exemption or deduction from gross income or which provide a special credit, a preferential rate of tax, or a deferral of tax liability.

They are the law. One gets the benefit by not "evading them."

How about some examples of loopholes? Here are a several:

All of these are perfectly legal because they are part of the tax code, not because tax law wizards are locked up in a back office helping clients break the law. Yet politicians of both parties utter the word "tax loophole" like it's in the same class as see you next Tuesday.

This may come as a shock, but this is not new. In the comments of Bergin's post, there is a comment citing a paper written by the legendary Boris Bittker from 1973.

Here's a clip from the paper Income Tax “Loopholes” and Political Rhetoric: 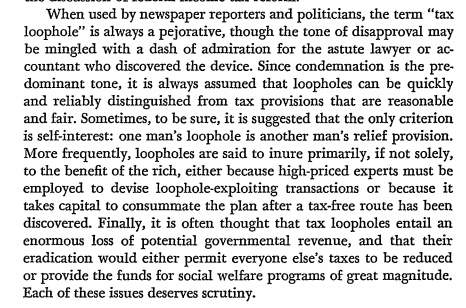 And what's more, loopholes are not matters of happenstance: 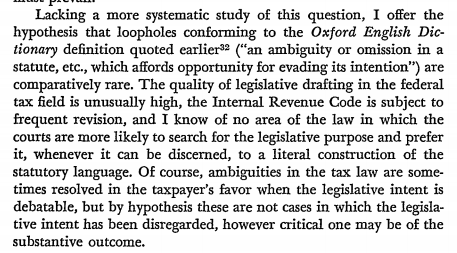 Loosely translated, "The quality of legislative drafting in the federal tax field is unusually high," means, "Those dudes know exactly what they're doing."

Wouldn't it be nice to have a job where you get to write very specific rules for others to follow very closely and then complain very loudly when they are being followed too well? That sounds like a great job.

Yesterday morning, Accounting Today published a few letters from readers sent in response to AT’s August 26 article titled Do we need accounting firms? Editor-In-Chief Daniel Hood specifically invited reader comment when he asked out loud if we can do without accounting firms and, as expected, there were comments to be had. Like Randy Crabtree, […]